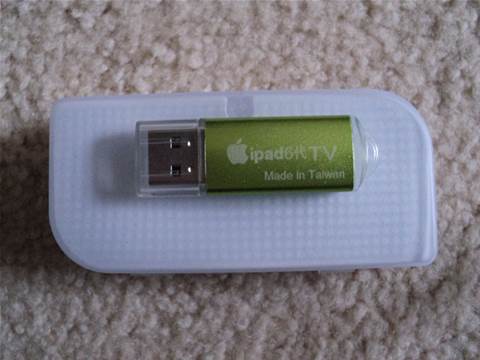 A man has been arrested in Sydney today after being caught selling access to a pirate television and movie service, sold using counterfeit devices bearing the Apple trademark.

The premises of Q Mart Pty Ltd, a retailer operating from the Sydney suburb of Ashfield, was raided by NSW Police after an undercover investigation by Michael Speck, a copyright specialist working on behalf of international entertainment networks.

Speck had purchased a USB stick branded ‘Apple iPad6 TV’ from the premises for $99, which alongside a $50 per month subscription fee purported to offer over 1100 pirate TV channels (including MTV, Discovery Channel,  ESPN, CNN, HBO, Fox and the BBC), over 1000 first-release movies on-demand (including Hugo, Tin Tin and Mr Poppers Penguins), over 600 adult films and downloads of popular television programs including ‘The Family Guy and ‘Big Bang Theory’.

A forensic analysis of the USB stick found it offered “proxied and peer to peer access to restricted sites” hosted within China and the United States, which host “several pay TV stations as well as streaming videos and other copyright materials.”

Ashfield Police seized several counterfeit Apple devices in the raid today, plus documents and records detailing past sales of the device and subscription sales.

Speck, acting for Chinese-language Pay TV group TVB, was also behind a raid on a Hurstville retailer late last year that offered access to a similar pirate network.

But while the Hurstville business offered access via a set-top box, the Ashfield business was selling its service through an Apple-branded USB stick [see gallery above].

Speck told iTnews he offered the opportunity for Apple Australia to also pursue the retailer to protect its trademarks, but to his disappointment the company declined.

“The pirates have created a doppelganger of the global Pay TV industry for commercial gain and are actively targeting the customers of legitimate businesses,” Speck said. “This is a concerted attack on the legitimate operators and their customers by people interested in profiting from the work of others and it needs to be stopped.”

Speck said he would not hesitate to charge buyers of the pirate TV service if they too were caught up in a raid.

“Customers of this criminal enterprise are not unintended beneficiaries of the digital revolution, they are receivers of stolen property,” he said.