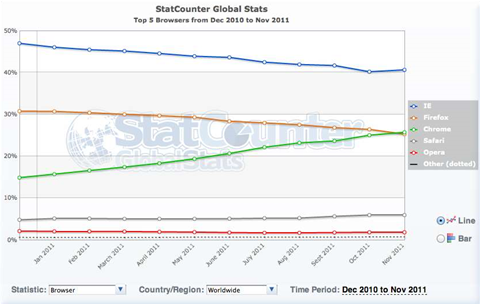 If not, it looks set to happen anyway.

Chrome may have overtaken Firefox as the second most widely used browser, depending on whose statistics you believe.

Chrome crossed the threshold in November with 25.69 percent of the world's desktop browser market against Firefox's 25.23 percent, according to GlobalStats' latest figures,

Though Internet Explorer's dominance is being eroded by Firefox and Chrome, Microsoft remained on top with 40.63 percent.

In Australia, Firefox remains the second most widely used browser, according to StatCounter, but the gap between it and Chrome shrunk from 14 percent in January to two percent in November. Chrome overtook Firefox in Britain this July.

Safari's share of Australia's browser market at 13.5 percent is also consistently higher than the world average of 5.9 percent.

Net Market Share figures put Firefox still ahead of Chrome by four percent worldwide in November, but its figures also show Chrome rapidly closing the gap over the past year.

Mozilla has been working hard to improve Firefox with its Chrome-like rapid release updates that put it out of kilter with some enterprise processes and forced it to set up a special working group to deal with those changes.