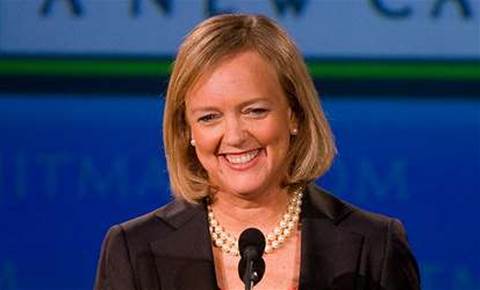 In her first major speech to customers since replacing Leo Apotheker nine weeks ago, Whitman told the 3500+ attendees at the HP Discover conference this week that the main question asked of her staff in recent weeks was “what the heck is going on at HP?”

Customers had been alarmed by uncertainty over the future of HP’s PC division, the expensive ousting of CEO Leo Apotheker and fourth quarter results featuring flat revenue growth and a steep decline in profit.

"This CEO transition is hard on employees and the customers we work with,” Whitman told the audience.

“Over the last year we confused some people about who we are as a company… I want the HP drama out of the headlines and get our products and services into the headlines.”

Whitman noted that just about every product and service in HP’s portfolio was in the top two sellers in their category.

“It’s what we do better than anyone else,” she said. “We need to stand up and be proud of this area of great strength.”

Former CEO Leo Apotheker had attempted to shift HP’s focus into the more profitable areas of software and services, kicking off the US$10 billion buyout of British software firm Autonomy.

But Whitman today stressed she is not looking to “transform HP into a software company”.

Sharing the stage with key partners SAP and Microsoft, Whitman noted that all of HP’s software – including Autonomy - aimed to provide customers with tools to manage heterogeneous environments.

“It is a distinguishing characteristic of HP,” she said. “You don’t have to throw out our competitor’s stuff; HP helps manage it.”

She also pitched HP’s services business as a vehicle for selling HP’s core IT infrastructure products.

For enterprise customers, Whitman said the company had “doubled down” on investments in converged infrastructure (data centre automation and consolidation), application transformation (modernising legacy applications), IT security (via the ArcSight and Fortify acquisitions), information optimisation (via the newly-acquired Autonomy business) and hybrid cloud.

Beyond the products and services, Whitman focused in her speech on how HP would become a more customer-centric organisation.

“I have walked in your shoes,” she told customers, explaining that she was once a “huge buyer of technology” in her former roles at eBay and Walt Disney.

“For the first time in a long time, the CEO of HP was a former customer of HP. I want to orientate everything we do through the lens of our customers.”

She said customers had told her they would buy a greater breadth of products and services from HP “if only [HP] could make it easier” for them to do so.

Whitman urged HP’s 320,000 staff - working across diverse areas of technology - to speak the same language when talking to customers.

“We need to be one team and show up at one team for you,” she said. “You shouldn’t have to figure out how we’re organised to give you what you need.”

Whitman did not say whether this would require a restructure. If anything, her speech indicated the firm would be hiring.

“We are working very hard to attract, retain and grow the best people… to make sure every account is properly staffed,” she said.

Whitman told analysts earlier this week not to expect any large acquisitions in the near future, committing to Apotheker’s plan to restore the company’s R&D spend.

“We need to get back to the breakthrough innovation and technology that we were known for for 70 years,” she said.

Brett Winterford travelled to HP Discover as a guest of HP.