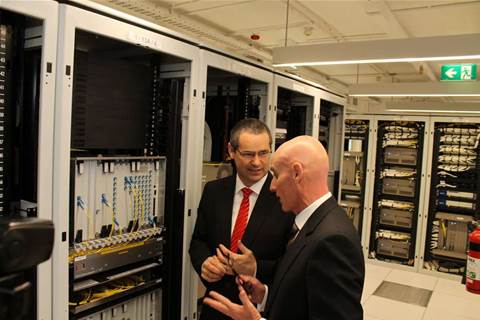 Puts demonstration centre truck on the road to Tasmania.

The centre is co-located with a national test facility and a discovery centre, which is a demonstration suite aimed at educating the public about the NBN and the services it will enable.

A mobile version of the discovery centre has also been built in a 23-tonne truck that is scheduled to visit more than 100 cities and towns across Australia over the next year.

The truck will begin its journey in Tasmania next week to provide communities with information on planned rollouts in their areas.

The test facility, billed as an 'NBN in a room', contains elements from 10 Tbps network equipment used for inter-exchange links to the cabinets being installed to serve greenfields developments and in-home units that bring NBN connections into homes.

Also present are mock-ups of the equipment that will be installed at Telstra exchanges and examples of the LTE TDD fixed wireless base stations that will be used in the company's wireless rollout.

In the event of a power failure, the NSOC is designed to operate for 15 minutes on battery backup before onsite generators are required.

Functions can also be taken over by NBN Co's major depots, of which there are to be two in each capital city.

Other functions at the Docklands site include a service activation centre, which will handle request from service providers to activate connections to specific premises.

"This is the operational HQ of a project that will change the country," Communications Minister Stephen Conroy said.

Victorian Minister for Technology Gordon Rich-Phillips foreshadowed an announcement of an accelerated NBN rollout in Victoria in 2012.