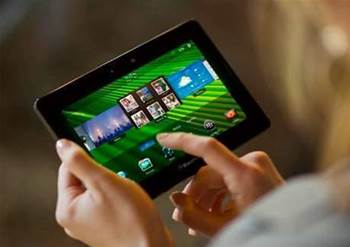 RIM wages tablet war as Ultrabooks emerge as the answer.

The new deal is slightly different to its existing enterprise discounts for North America, in that it is only available to IT administrators that make the upgrade to version 5.0 of BlackBerry Enterprise Server software.

The deal adds one more component to the "sell through" strategy it first mentioned in September after shipping only half of the 400,000 PlayBooks it expected to for the second quarter of 2011.

Facing heat from Amazon's $US199 Kindle Fire on the consumer side, RIM this week lowered its 16GB device to meet the Fire, and reduced its 32GB version to $US299, marking a $US300 discount a piece and bringing the device to within dollars of its component costs.

Other tablets makers have followed suit. Lenovo's 7-inch 16GB WiFi A1 tablet, which started at US$349 is now available at Best Buy for US$199.

The Intel-backed push for new fast boot, solid state drive Ultrabooks, arriving this week in the form of HP's Folio, are hoped to provide an answer to the Apple-dominated tablet category.

Analyst firm iSuppli estimates Ultrabooks will make up about 40 percent of all Notebook PC shipments by 2015 but to compete with tablets, manufacturers will have to make them more attractive.

Doing that in the short term might be difficult though when Apple's MacBook Air is the prioritised recipient of a limited supply aluminum "unibody" casing, forcing PC rivals to turn to plastic or fibreglass casing, according to Apple Insider.