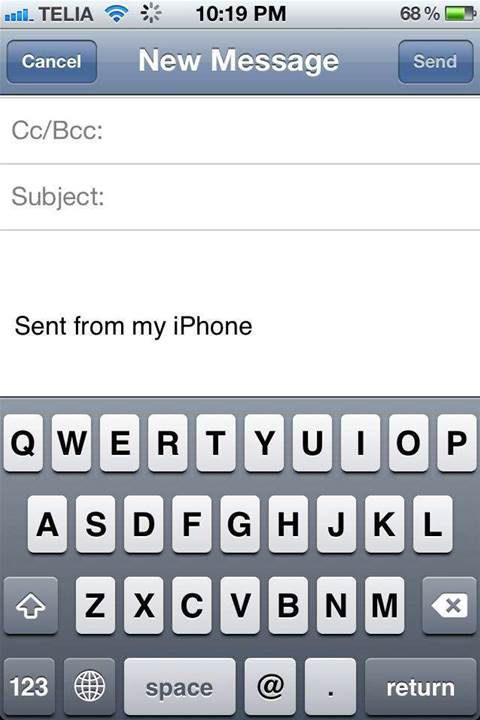 Microsoft has ditched a funding deal with an independent Swedish Windows mobile blogger, allegedly after he sent an email to a Microsoft representative that contained a "Sent from my iPhone" signature.

Toni Johansson, publisher of Windows phone specialist site winMobile.se for the past six years, announced Monday he would shutter the site after Microsoft dropped a potential funding deal to have it redeveloped.

He alleged the funding deal was dropped because he used an iPhone.

"They abruptly closed the door due to the fact of a simple signature," Toni told iTnews in an email.

Johansson claimed to have fallen out with one Anders Wedahl, a Swedish Microsoft technology evangelist who he was supposed to meet for lunch to discuss the site's future.

The blogger said he had been negotiating with Microsoft over several months and he believed he would soon finalise a deal to secure funds from Microsoft to revamp the website.

However, just before the pair were to meet for lunch, Johansson claims he received an email from Wedahl that highlighted in yellow the iPhone signature on the bottom of Johansson's last piece of email correspondence.

He claims Wedahl's email stated: "not a chance that we'll continue after this!".

I have got the money to make a real effort to give your site a facelift – metro design, HTML5, I’ve signed the people that will do the work, and also checked some other things that we could do to help to manage the site – but seriously, – you really put an end to that today (see yellow below).

Not a chance that we’ll continue after this!

Johansson has received a mixed reaction to his plight. One commentator said that sending the signature would be like showing up at a party with the host's ex-girlfriend and expecting a warm reception.

Johansson said that none of the additional funds from Microsoft would have gone to wages, only to improving the site.

Also, the iPhone that killed Johansson's hopes of gaining funding was not his primary phone. He said he also uses an Android and a Windows Phone 7 device that was "bricked at the moment" following a recent Microsoft update.

The blogger's use of an iPhone would not have been a secret to Microsoft either.

"I've been at MS HQ in Sweden many times and have never hidden that I have an iPhone, nor an Android phone.

"I have stated on my site that I do use an iPhone, I have also made several reviews of Android phones, just because I need to understand the market, and be updated on what's out there," said Johansson.

The last time Johansson was at Microsoft's Swedish headquarters to report on its Windows Phone 7.2 Mango release, he said he took his notes on Apple's iPad.