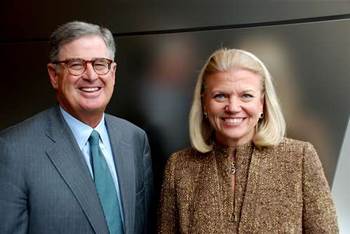 Sam Palmisano to step down on January 1.

IBM's global sales chief Virginia Rometty will take over as CEO from Sam Palmisano in 2012, a move that may make her one of the most powerful women in business and technology.

Palmisano will remain chairman after nearly a decade as the company's chief executive, during which he helped transform Big Blue from a personal computing hardware company into a global services behemoth.

Rometty's ascension will make IBM the largest US corporation by market value to be headed by a woman. It also sets up a rivalry with Hewlett-Packard CEO Meg Whitman for the unofficial title of most powerful woman in technology, mirroring a long-running rivalry between the two companies.

Rometty, 54, takes over on January 1. Shares in IBM slipped 0.7 percent after hours.

"Given Ginni's experience running the largest portion of the business by revenue, she was a logical choice," said Macquarie Securities analyst Brad Zelnick.

In nine years as IBM's leader, Palmisano, 60, exited low-margin businesses including PCs, printers and hard drives. He expanded the company's offerings in services, consulting and software.

Rometty most recently served as senior vice president of global sales for IBM after leading its global services business, where the company is the world's biggest provider of technology services.

"She has done well at IBM. She has contributed to their expansion overseas -- emerging markets -- and has done a fantastic job in that space," said Morningstar analyst Sunit Gogia.

"All the public knowledge about her performance is very encouraging."

But "computing is an industry that is always evolving," Gogia said.

"It's moving into an era of cloud computing. The company will have to reinvent itself for the future, stay with the times and maintain the revenue base when they do that."

(Reporting by Jim Finkle and Edwin Chan. Additional reporting by Jennifer Saba and Liana Baker in New York and Bill Rigby in Seattle. Editing by Gary Hill and Robert MacMillan)