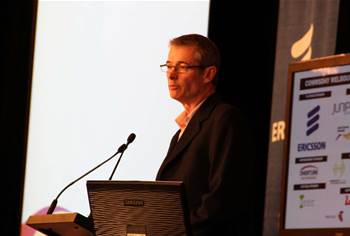 Things likely to get worse before they get better.

Complaints about telco services could rise in the short term despite regulatory efforts to curb them, Australian Communications and Media Authority deputy chair Richard Bean has warned.

Bean told the Commsday Summit in Melbourne that co-regulatory attempts to improve customer service would likely lead to a spike in complaints as increasingly confident users attempted to get better outcomes.

The regulator last month completed its public inquiry into customer service and complaints-handling by telcos.

It recommended, among other things, that telcos reveal and simplify the presentation of spend and usage data to consumers.

The ACMA required the recommendations be set out in a revised telecommunications code or practice, currently being drafted by the Communications Alliance, by February 2012.

Bean congratulated Communications Alliance CEO John Stanton for "meeting [the ACMA's] expectations" with drafts of the industry code released to date and moves by major telcos to meet the recommendations, including single-page plan summaries and near-real time usage information.

But Bean forecast the inquiry and subsequent industry actions could "work so well" that complaints to the TIO and telcos rise before they fall.

"We wouldn't see that as a sign of failure at all - as long as it's followed by a correction in the trend," he said.

"It's not the presence of the complaints that's necessarily the problem - it's the failure to act on them."

Bean said the ACMA was committed co-regulation with telcos and industry bodies on key consumer complaint issues but warned it would not drop the possibility of imposing stricter regulation if the planned code of practice did not work long-term.

"Complaint handling may be an example of that and if that turns out to be the case, the ACMA will move to imposing a standard," he said.

"We set out to materially improve the customer service environment for telecommunication customers and we won't be resiling from that goal."

Bean pointed to the regulator's numbering plan consultation as another element of its attempt to co-regulate in the interest of consumers.

In the first of several consultation papers, the ACMA proposed this week to drop the charges for calls from mobiles to 1800, 13 and 1300 numbers and limited the charges of mobile to local rate number calls.

The calls are currently free when originating from fixed lines but charged at timed rates from mobiles.

The regulator hopes to impose the changes in order to reflect the increasing proportion of calls made to the numbers - traditionally seen as free by end-users - originating from mobiles and solve confusion among end users.

The changes, if enacted, will affect approximately 291,000 active services operated by 100,000 organisations, according to 2010 statistics.

The Australian Communications Consumer Action Network, which had lobbied for the changes, welcomed the proposal.

"With people moving away from fixed-line services to rely on mobiles, it makes perfect sense that this regulation keeps up with the way Australians are using their phones in 2011," director of policy Elissa Freeman said in a statement.

"We've heard many horror stories: from people paying $40-$50 on a mobile call to their insurer, from children running out of credit due to per-minute costs to the 1800 Kids Helpline, people spending $13 to arrange a Red Cross blood donation and welfare recipients missing out on benefits because they can't afford to wait on hold to speak to Centrelink."

It came as one of several measures the ACMA is to propose over coming months as it consults with industry over changes to numbering plans.

Bean said ACMA also hopes to propose potential increases in the amount and methodology behind allocation of mobile numbers and the flexibility of state-based geographic numbers.

"Numbering is very much a convergence issue for us," he said.