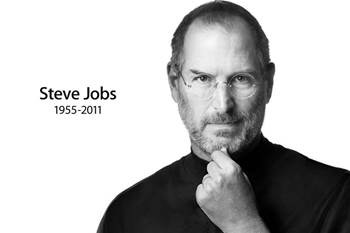 Jobs took medical leave on January 17, 2011, battling a rare form of pancreatic cancer. He stepped down from the CEO role on August 25, 2011.

Apple's board of directors put out a statement confirming Jobs' passing at 10.34 am Australian eastern daylight savings time.

"We are deeply saddened to announce that Steve Jobs passed away today," the note said. "Steve’s brilliance, passion and energy were the source of countless innovations that enrich and improve all of our lives. The world is immeasurably better because of Steve.

"His greatest love was for his wife, Laurene, and his family. Our hearts go out to them and to all who were touched by his extraordinary gifts."

"In his public life, Steve was known as a visionary; in his private life, he cherished his family. We are thankful to the many people who have shared their wishes and prayers during the last year of Steve's illness; a website will be provided for those who wish to offer tributes and memories.

"We are grateful for the support and kindness of those who share our feelings for Steve. We know many of you will mourn with us, and we ask that you respect our privacy during our time of grief."

The company has also created a web page for customers and partners at http://www.apple.com/stevejobs.

Apple's tribute to Steve Jobs
Already, tributes are flowing through on social networking sites such as Twitter.