Gmail to work offline but not Docs editing 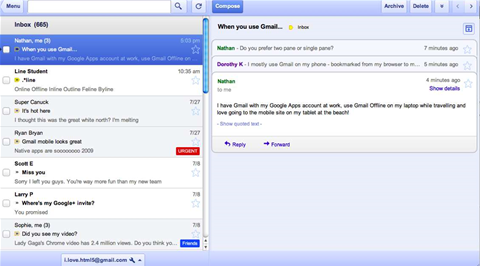 Google has made Gmail available offline with the help of its Gmail Offline Chrome app, with similar browser apps for Calendar and Docs due this week.

The Offline Gmail app hit Google’s Chrome store on Wednesday, bringing to the desktop browser a few features that Google already had made for its HTML5-built iPad app.

The user interface for the new app is similar to its iPad predecessor, which displays a list of subject headers and senders in one pane alongside another containing the full text of a selected email.

Although well-established email clients offered similar functionality, the app could make a useful addition to its locked-down Chromebooks for education and business.

“When we announced Chromebooks at Google I/O 2011, we talked about bringing offline access to our web apps, and now we’re taking our first steps in that direction,” explained Google product manager, Benoît de Boursetty.

Those first steps allowed people to read, respond to, search and archive email offline but wouldn't allow them to control the amount of email synchronised.

The holy grail of editing Docs documents and spreadsheets offline did not make the current cut either.

“Offline editing isn’t ready yet, but we know it’s important to many of you, and we’re working hard to make it a reality,” said de Boursetty.

“Support for offline document editing and customising the amount of email to be synchronised will be coming in the future.”

The apps could be activated when an internet connection is lost by clicking an icon on Chrome’s “new tab” page that appeared after the app was installed.