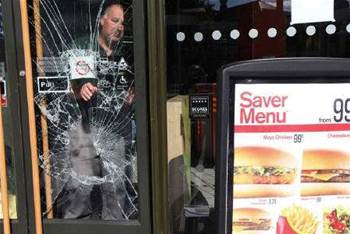 The British government said on Thursday it was not seeking special powers to shut down social networking sites during civil unrest after holding talks with the industry and police on how to stop people plotting violence online.

It described a meeting between Home Secretary Theresa May, police and executives from Research in Motion's Blackberry Messenger, Twitter and Facebook as "constructive".

It hoped to build on cooperation to crack down on criminal elements taking advantage of the networks in the future, but said there were no plans to take drastic action.

"The government did not seek any additional powers to close down social media networks," a Home Office spokesman said.

Police and MPs say they have some evidence social media, in particular RIM's popular Blackberry Messenger (BBM), was used by rioters and looters to incite violence that tore through the capital and other English cities two weeks ago.

Many of the rioters favoured BBM over Twitter and other social media because its messages are encrypted and private.

After the meeting Facebook said it "welcomed the fact that this was a dialogue about working together to keep people safe rather than about imposing new restrictions on internet services".

The company reiterated that the site was used for many positive purposes during the riots, including letting friends and family know they were safe, and stressed there was "no place" for illegal activity on the site.

Facebook has said it has already prioritised a review of taking down content on its site that is "egregious during sensitive times like the [British] riots".

In the immediate aftermath of the riots RIM said it cooperates with all telecommunications, law enforcement and regulatory authorities, but declined to say whether it would hand over chat logs or user details to police.

Online social media firms also say that their services were widely used by members of the British public to help others avoid troublespots and to coordinate a clean up after the riots.

In the wake of the disturbances two weeks ago, that shocked the country, Prime Minister David Cameron had asked authorities to review "whether it would be right" to shut down online communication altogether during periods of social unrest.

Such a move has been widely condemned as repressive when used by other countries, especially during the Arab Spring uprisings in North Africa and the Middle East.

Egyptian authorities shut down mobile and Internet services in January during mass protests against then-President Hosni Mubarak, while China is quick to shut down online communication it sees as subversive.

The Home Office said previously that "social networking is not a cause of the recent disturbances but a means of enabling criminals to communicate" and that needed to be tackled.

Responding to questions about Twitter's role during the disturbances in London, the city's top police officer Acting Commissioner Tim Godwin told a government committee he had toyed with the idea of seeking powers to switch it off.

But he said: "The legality of that is very questionable and additionally it is also a very useful intelligence asset."