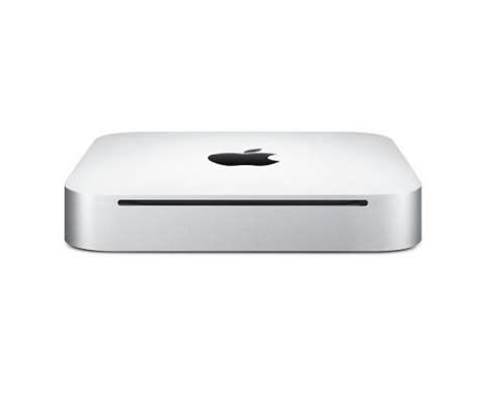 Faster, cheaper and more tempting than before.

The Mac Mini may lack the glamour of the iMac or the stunning new MacBook Air models, but it’s maturing into a very capable little machine.

The stylish unibody aluminium design remains, but the optical drive slots have gone: Apple argues an optical drive is no longer essential for everyday computing, and it has a point.

You can, of course, attach an external drive, or share an optical drive from another Mac or PC over the network. If you want to install Windows, the Boot Camp Assistant can create a bootable USB drive from an ISO image of the Windows DVD.

Round the back, the mini-DisplayPort socket has become a Thunderbolt port; otherwise, external connections are unchanged. You still get HDMI, four USB 2 ports (there’s no USB 3 in Apple-land, alas) plus FireWire 800, Gigabit Ethernet and an SDXC slot.

There’s dual-band 802.11n and Bluetooth 4 wireless connectivity too. As usual, what you don’t get is a keyboard and mouse, but you can use existing PC peripherals so long as you don’t mind a few keys being in the wrong places.

These are mobile parts, so power consumption remains low – our review unit idled at around 30W, rising only to 65W under heavy load – but desktop performance is boosted by around 50 percent over last year’s models.

Storage has been increased too. The consumer models now come with a 500GB 5,400RPM drive as standard, up from 320GB.

Note that internal drives can only be fitted at the factory: if you need more space down the line you’ll have to make do with external storage, or use the SDXC slot at the back of the Mini.

You can at least upgrade the RAM yourself. That’s just as well, as the base configuration still comes populated with a rather mean 2GB, and Apple will charge you $120 for an upgrade to 4GB. Unscrew the base to access the two SO-DIMM DDR3 slots, however, and you can install third-party modules costing less than half that.

The Mac Mini could make a great media centre: after all, it's small, energy-efficient, almost silent in operation and blessed with an HDMI socket. But the high price of internal storage means you’ll probably want to attach an external hard disk.

If you want a TV tuner or DVD drive, those will need to be external too. And it doesn’t help that Apple has removed the Front Row interface from Lion, so you'll have to turn to third-party options such as Boxee – or switch to Windows.

The one area where the Mini’s internals have been pared back is graphics. The 2010 models all featured a discrete Nvidia GeForce 320M GPU; now, the base and server models use the processor’s on-chip graphics, providing only enough power to make Crysis playable at Low quality settings.

The premium model, however, gets an upgrade – an AMD Radeon HD 6630M with a dedicated 256MB GDDR5 frame buffer. In our tests it managed 69fps at Low quality and a respectable 39fps at Medium quality.

Of course, the Mini never claimed to be a gaming platform, or anything more than a compact desktop PC – and with a Sandy Bridge processor tucked away inside that iconic little case, it’s an increasingly credible contender for that role.

To be sure, the Mini has its limitations: a big-box PC will still offer much more power and expansion potential for your money. But if you’re looking for a basic OS X machine, or a general-purpose low-profile desktop, the Mac Mini is an elegant, efficient and capable option.