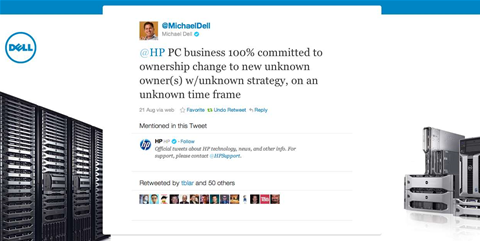 Dell’s jibes began at HP’s Thursday announcement that it would spin off its PC business and continued over the weekend as retailers cleared out their TouchPad inventory.

“If HP spins off their PC business....maybe they will call it Compaq?” he joked at the announcement.

Then on Friday: “HP.... They are calling it a separation but it feels like a divorce.”

And again on Saturday: “Goodbye HP, Sorry you don't want to be in PCs anymore..But we do more than ever. How would you say goodbye to HP?”

Having pondered HP’s decision for three days and had time to pore over Leo Apotheker's conference call with investors, Dell on Sunday shot his sharpest arrow at HP’s official Twitter account.

On Thursday, asked why HP would not just spin off its PC business now rather than wait, Apotheker replied that "over time, a decision will or will not crystallise on what the most appropriate way is to deal with PSG going forward", according to a transcript on Seeking Alpha.

Not to be outdone, HP replied to Dell's last comment that its Personal Systems Group was still the top PC supplier and as a standalone unit would be a Fortune 60 company that was led by the "some of the best brains in the industry".

However one of the group's most popular best brains may soon be leaving, according to the Boy Genius Report, which claimed on Monday that Todd Bradley, HP’s executive vice president of its US$40 billion plus a year PC business was seeking an exit from HP.

The former CEO of Palm was former HP CEO Mark Hurd’s first major hire in 2005 and was also the driving force behind HP's 2010 acquisition of Palm and webOS.