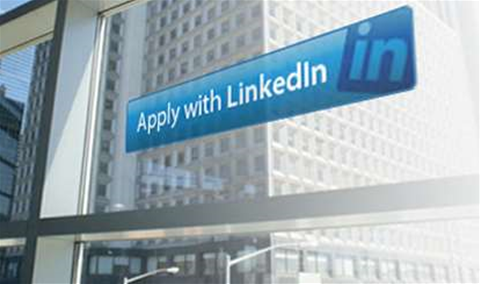 The plugin gave recruiters an option to embed an "Apply" button on the company website which allowed members to submit an application with "one click".

The application would be based on profile data held by the network.

Recruiters could embed a few “snippets” of code to install the Apply button, according to LinkedIn.

The company has sweetened the proposition with automation features that allowed a recruiter to receive applications by email or integrate responses into existing recruitment tracking systems.

Before an application was submitted, the applicant could update certain elements of their profile such as contact details, and after submission, connections at the target company were highlighted.

“If you don’t know anybody at the company, we’ll show you people who can introduce you to someone there,” LinkedIn technical product manager Jonathan Seitel wrote on the company’s blog Monday.

“This is extremely powerful – statistics show that referrals are the #1 source of external hires at companies,” he added.

Online recruitment giant Monster was aware of the power of connections when it launched its Facebook app, BeKnown, in late June.

Like LinkedIn’s company-insider flagging system, BeKnown highlights connections but only when a contact in a person’s network posts a job.

BeKnown allowed Facebook members to add a separate work persona to their accounts, which maintained the user's Facebook connections.

A few days after Monster's Facebook launch, LinkedIn ousted the website by blocking the APIs it had used to hook into LinkedIn.

Monster was disappointed at being blacklisted, arguing the decision was against LinkedIn's spirit of openness and connectivity, and declared it would fight on with with Facebook, Yahoo and Google.

But unlike LinkedIn's recruitment drive, which begins with a 100 million pool of candidates, Monster faces a crowded Facebook apps market to reach its 700 million users.

A month after BeKnown launched, it had attracted 645,000 Facebook users.