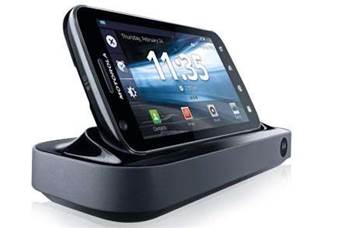 Dual-core smartphone comes at a price.

Motorola’s Atrix was the first dual-core phone to launch in Australia, since followed by LG’s Optimus 2X, the Galaxy SII from Samsung and the HTC Sensation.

In terms of external design it looks like most smartphones – a 4in display in a frame measuring 117.75 × 63.50 × 10.95 mm with a very decent weight of only 135g. This means the phone does feel a little less solid than some on the market and we also found that the rear case was quite susceptible to scratching.

The rear camera is 5mp with 720p video capture at 30fps and a VGA front-mounted camera for video calling.

Before that starts to sound a little “same old, same old”, lets get to the points of difference. On the surface, the immediate differences are the miniHDMI port and the fingerprint scanner (which doubles as the power and lock button as well).

The screen is a qHD display with a resolution of 960x540 and a 16:9n aspect ratio, as well as being Gorilla Glass for extra durability. Inside is the famed dual-core 1GHz Tegra 2 processor, along with 1GB of RAM on 16GB of memory (plus an additional max of 32GB via microSD). 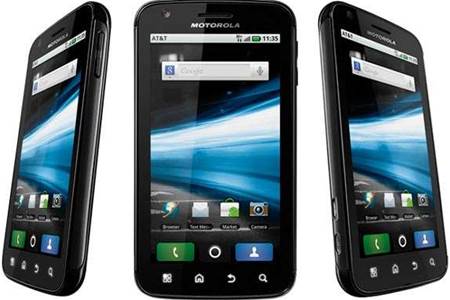 The Motorola Atrix: the screen is astoundingly crisp

Of course, the Atrix’s big point of difference is the WebTop software, turning the phone into a cloud-PC thanks to one of two different form factor docks available and a full version of the Firefox browser along with some proprietary Motorola software.

The multimedia dock even comes with a remote and is designed for the phone to be used as a media player.

We found that we were able to use the WebTop mode for a number of tasks, including happily using the LogMeIn service to remote control a PC with reasonable speed.In terms of use, the screen is nothing short of remarkable – super-bright even in sunlight and astoundingly crisp.

The processor zips along at an impressive rate of knots. The ABC site happily loaded in around 4.1 seconds while the Sunspider JavaScript benchmark came in at 4337ms – for comparison, the HTC Incredible S scored 5779ms in our tests.

How this stacks up to other dual-core phones, however, we’ll have to wait and see.

Sadly, the Atrix is not perfect. The fingerprint scanner can quickly become more of an irritation than anything else – the positioning can make it very hard to get a good read on a swipe when holding the phone one-handed, meaning we often ended up holding the device in one hand and swiping with the other.

Battery life too is a problem, with our unit running out completely at the 23 hour mark of our 24 hour test. (It should be noted, however, that in a week of continual use, we never ran out of battery before plugging it in at night). We were however pleasantly surprised by the super-fast charge time – we were at full battery capacity in just over two hours.

While the build might miss some of the “sexier” elements of other phones, the Atrix is a truly remarkable workhorse – almost insanely over-powered for most phone tasks. The pricing is  decent ($840 outright or $20/month on the $59 plan) but we were a little underwhelmed by the $449 price tag on the laptop dock, with no bundle of the two currently available.

In all, though, this is a powerful offering from Motorola and has set a high bar for the next crop of dual core phones.