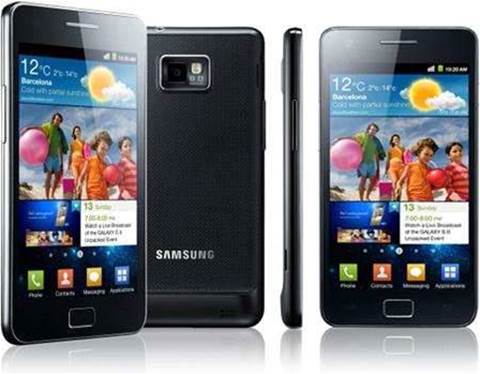 Zips along at a blitzkrieg pace.

The Samsung Galaxy S II operates on the Android 2.3 Gingerbread OS and boasts a 1.2GHz dual-core application processor, 4G (HSPA+ 21) connectivity, 1024MB of RAM and a 4.27in Super AMOLED Plus display.

The Galaxy S II's main claims to fame are its blistering speed and huge screen. It has impressive battery life for a smartphone of this calibre and an attractive user interface that's easy to get to grips with. It also looks great - which is just as well, given the $899 price tag.

At just 8.5mm thick, the Galaxy S II is currently the world's thinnest smartphone, beating the Apple iPhone 4 by around a millimeter. Its body is constructed primarily of plastic, but this doesn't detract from its lavish, premium feel.

And while some may prefer the pristine metal finish of the LG Optimus X2, the upside is a lightweight construction of just 116g.

It's not all perfect though: The backplate feels quite flimsy and can be a pain to remove. Also, the screen is a tad too sensitive for our liking; if you don't lock the phone before slipping it into your pocket you're guaranteed to launch an app.

But all in all, we are very happy with the build quality of this phone. It’s stylish without being garish and is sure to elicit envious looks from friends and passersby.

The Samsung Galaxy S II super glossy AMOLED Plus screen is crisp, vibrant and has excellent viewing angles, making it a perfect phone for video playback.

We were particularly impressed by how easily fingerprints were removed from the display: a quick wipe of the sleeve is usually all it takes to return the phone to a pristine state.

The display also fares well in direct sunlight. We experienced little reflectivity when using the phone on the highest brightness setting; something that can't be said for every smartphone on the market. The display is also covered in durable Gorilla Glass to protect against knocks and scratches.

The release of the Samsung Galaxy S II coincides with four new content and entertainment hubs for Samsung smartphones: Game, Music, Reader, and Social. The new hubs provide a good, fuss-free access point to Samsung's various apps and services, although at the time of writing, the Music Hub has not been launched in Australia (a Samsung spokesperson assures us it will be "coming soon").

You can naturally customise the Galaxy S II's seven home screens to your heart's content. Apps and widgets can be rearranged and moved between screens with a few quick finger gestures. It's all very easy to get to grips with and should be instantly familar to anyone who has used a touch screen phone before.

The Samsung Galaxy S II keeps physical controls to a minimum; you get a power/lock button, a volume rocker and a home button, plus a pair of touch-sensitive controls below the AMOLED screen. Otherwise, all commands are enacted with the touch screen. We would have liked a dedicated camera button (more on which later), but overall we think the phone handles quite well.

The revamped TouchWIZ interface is a definite improvement over the UI found on the original Samsung Galaxy S. Gingerbread lets you copy and paste text across multiple applications, which is handy for emails and the like. We also like the added touch functionality, such as the ability to mute calls by placing the phone face down and swiping contacts to make automatic phone calls.

With dimensions of 125x66x8.5mm, the Samsung Galaxy S II is on the large side for a mobile phone; as necessitated by its 4.3in display. Subsequently, making a phone call can feel a bit awkward at first, but we soon got used to it. Personally, we think the extra screen real estate is worth it.

Samsung Galaxy S II vs Apple iPhone 4: the added size is both a plus and a minus.

If you're afflicted with ungainly sausage fingers or just have large hands, the Galaxy S II's 4.27in display is going to be a godsend. ﻿Typing texts and emails is a breeze thanks to the plus-sized keyboards - you can even use your thumbs with minum hassle. We're also big fans of the new Swype input method that makes texting a lot faster.

With all those added tools and features, it’s sometimes easy to overlook a smartphone’s main purpose for existing (i.e. to make phone calls). Unfortunately, this is not one of the Samsung Galaxy S II's strongest suits.

While call quality is good, we think volume could certainly be higher. At times we struggled to hear the other speaker on busy city streets.

You can always switch to the robust speaker phone, but this isn't a viable option in every situation (traveling on public transport, for example).To be fair, this is a criticism that can be levelled at many smartphones. Nevertheless, a little more 'oomph' in the receiver department would have been appreciated.

On the plus side, coverage was solid in our initial use of the phone: we experienced minimal dropouts while using the Galaxy S II on a train from the Blue Mountains to North Sydney (this will also naturally depend on your network provider).

When it comes to online performance, the Samsung Galaxy S II is nearly in a class of its own. It boasts download and upload speeds of 21Mbps and 5.76Mbps respectively, which makes it one of the fastest on the market. As expected, the addition of dual-core processing really boosts this phone's performance. It really makes a difference to productivity; particularly when it comes to Web browsing.

The camera's user interface didn't impress us. As mentioned earlier, there is no dedicated photo button – instead, you need to access the camera through the menu and press an onscreen 'shutter' icon. This is sometimes easier said than done. Meanwhile, the digital zoom is activiated by pinching the display, but this obscures your view of the shot.

This press image is a touch ambitious, but the Galaxy S II does take good video.

Thankfully, the actual photos themselves are impressive, especially when viewed on the Super AMOLED Plus display. Video recordings are also solid, with the Full HD resolution adding a splash of vibrancy and colour to home movies.

You also have access to the 300,000+ apps jostling for space in the Android Market.

It's worth noting that one of the Samsung Galaxy S II's heavily touted features - Near Field Communications - is not available in the Australian version of the phone. This is somewhat regrettable, with Google having just announced an NFC wallet payment system for instant smartphone transactions. However, it's unlikley that we'll be seeing this service in Australia any time soon, so perhaps it's not that big a deal.

Samsung has neglected to include a mini HDMI port on the Galaxy S II. You can, however, stream content to DLNA compatible devices, including TVs. You can also pick up one of Samsung's MHL adaptors which is compatible with HDMI.

When it comes to battery life, the Samsung Galaxy S II left us pleasantly surprised. During average everyday use, we had to charge the battery every two days or so. Naturally, ramping up video playback and other resource-hungry applications will eat up the battery quicker, but it's still an impressive achievement. We'll reserve proper judgement until we've run our proper benchmarks, but initial impressions are very positive.

The Samsung Galaxy S II is everything you could hope for in an Android smartphone. It has a huge screen, excellent battery life, a suite of arresting software and it zips along at a blitzkrieg pace. Based on our first look, we'd call it one of the best smartphones on the market.

The Galaxy S II will be available across all Australian mobile phone carriers, with Optus the first to announce pricing ($0 upfront on a $79 cap over 24 months). You can also buy the phone outright for an RRP of $899.