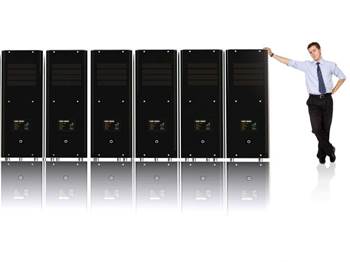 The proprietors behind Brisbane-based web hosting company Dedicated Servers Australia this week set live Fluccs – an infrastructure-as-a-service cloud compute that aims to live up to one oft-promised but rarely delivered attribute: to be truly elastic.

Unlike many IaaS offerings in which users choose a pre-configured compute “instance” (for example, 1 CPU, 2 GB RAM, 850 GB storage etc), the engineers behind Fluccs claim the service can offer true elasticity – the ability for customers to dial up or down as much CPU, RAM, bandwidth or local storage as required.

According to Angus Thomson, managing director at Fluccs and Dedicated Servers Australia, this flexibility allows for custom-made instances.

“Many users [of existing cloud services] find that they are maxxing out the RAM but only using 25 percent of the CPU, for example, but are still required to upgrade to a higher instance and pay for far more CPU than they need,” he said.

“We set this service up so that you only pay for the exact resource you need.”

The first is a monthly, pre-paid option under which a user selects the specifications of the instance they require via a sliding bar interface, which provides an indication of the monthly cost of such a build.

Under this option, the instance is provisioned manually by a Fluccs engineer – Thomson claims it takes only half an hour – allowing Fluccs time to authorise the transaction (run fraud protection etc).

Once the account is activated, the user is provided console access for creating the virtual machine, starting and stopping it and rebooting it. The customer can view system usage in real-time but needs to fill out a support ticket to ask Fluccs’ engineers to adjust any of the parameters.

“We can add more RAM and CPU resources with no interruption to the server ,” Thomson said. “The account is charged pro rata for the next period.”

Thomson said this model was designed for customers with reasonably regular usage patterns that might have used one or two dedicated servers or a virtual private server in the past.

Again, the service requires discussions with Fluccs engineers to set the parameters of the initial instance, but once activated this service allows customers to log directly into the system to create machines as and when they want, with whatever resources they want.

“To scale up, you simply select the machine, modify resources by increasing RAM or CPU, press ‘apply changes’ and the server immediately has new resources,” Thomson said.

This more flexible option comes at a slightly higher price and is billed hourly rather than monthly.

It also offers the ability to create VLANs. Customers can create a template of their virtual machines by making a manual backup.

“This would appeal to software developers that want to offer software-as-a-service on a standard configuration,” he said.

“They simply create a machine, install the software, back it up, create a template – and can from then on spin up each new instance for each new client within a matter of minutes.”

Thomson said customers can also choose to burst between dedicated servers onto a shared cloud platform should dedicated server hardware fail or be unable to cope with demand.

“It is what we consider a hybrid cloud – they can use the larger power and capacity of the shared platform for however long they need it, and migrate back afterwards.”

Thomson said the service offers two network links with diverse carriers for redundancy. Storage is backed up and replicated on-site – with paired SANs connected by a 10 Gbps link constantly synchronising to ensure services would remain online if one failed.

Thomson said the company is investigating whether to offer failover to a second location if customers were “willing to pay a premium.

“We want to make it as affordable for people as we can,” he said.

A threat to traditional revenues?

Thomson concedes that the flexibility of the cloud products is likely to hit his revenues from his 13-year-old dedicated and VPS hosting business in the short term.

“We will offer all our VPS clients the option to migrate across – show them what they are paying for, and if they are not using all the resources, show how it might actually cost less if the product was customised to what your server is doing.

“From a bottom line perspective, no, it doesn’t make 100 percent financial sense for us in the short-term,” he said.

"The majority of people on our VPS products started out in small hosting reseller accounts, moved up to managed dedicated servers, before we suggested virtualisation and took a drop in revenue from some of them.

“It’s easier for us to manage the customer, and offers them more stability,” he said. “We are looking to keep clients for life.”