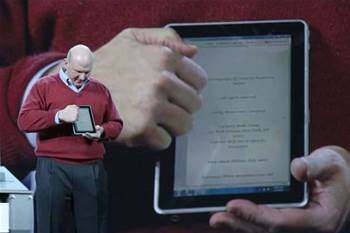 Microsoft spokesman says it was an 'error'.

Microsoft boss Steve Ballmer has confirmed the next Windows operating system Windows 8 will arrive in 2012.

“As we progress through the year, you ought to expect to hear a lot about Windows 8. Windows 8 slates, tablets, PCs, a variety of different form factors,” he said at a developer conference in Tokyo yesterday.

While the name and timeframe for Windows 8 has been bandied about for some time, Ballmer’s comments caused a stir since it was the first time the company had committed to a date.

But according to Microsoft’s spokespeople Ballmer made an error.

“It appears there was a misstatement. We are eagerly awaiting the next generation of Windows 7 hardware that will be available in the coming fiscal year.

"To date, we have yet to formally announce any timing or naming for the next version of Windows,” Microsoft told All About Microsoft blogger Mary Jo Foley.

Ballmer’s mention of both slates and tablets has also sparked speculation that Microsoft could be planning to release separate systems for the two form factors.

On that front, Microsoft had already confirmed it was working on a system for smartphone and tablet makers running on ARM chips.

It’s expected that Windows boss Steve Sinofsky will shed more light on Microsoft’s plans after being confirmed today to speak at next week’s All Things Digital conference.