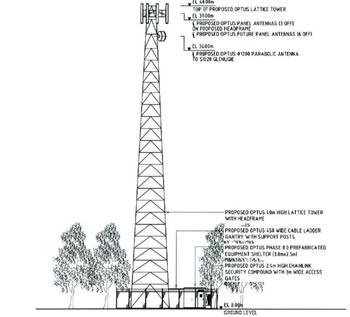 Optus has urged Clarence Valley Council to approve a 40 metre 3G tower near Grafton airport, despite concerns it could pose a risk to aircraft.

Councillors were due to vote on the development application at a meeting tonight. The news was first broken by the Daily Examiner.

The council's environment, economic and community committee last week recommended the application be refused because the proposed tower height posed "an unacceptable hazard to the operation of the Grafton aerodrome".

However, the council's environmental and economic deputy general manager Des Schroder noted [pdf] that a negative decision could result in an appeal by Optus to the NSW Land and Environment Court "for which there could be a financial cost to Council."

"The proposed facility will improve mobile telephone coverage and introduce an Optus 3G network to the surrounding rural land and the Pacific Highway," the council's committee report stated.

The committee raised concerns – backed by Grafton Aerodrome and the Civil Aviation and Safety Authority (CASA) submissions – that the proposed tower height penetrated the obstacle limitation surface (OLS) for the airport.

An OLS identifies the area around an airport that should be kept free of potential obstacles to flight paths.

Although CASA noted in a submission to council that it did "not recommend or support OLS penetrations", the agency provided some recommendations that could be implemented by Optus should council go ahead and approve the development.

Optus had accordingly "requested that it be noted that they interpret CASA's comments of the penetration not being supported as general advice", the committee report stated.

"The fact that CASA have provided mitigating measures to reduce the risk indicates that the proposal is acceptable", the committee noted of Optus' position.

Optus was said to have chosen the site because it was screened by mature trees and was not in the path of the runway approach.

The telco had also managed to secure a lease for the site – a major difficulty for carriers in any tower proposal.

"A lease hold tenure over the site is available," council noted.

"The applicant [Optus] has stated that it is difficult to find a land owner who will agree to enter into a lease."

However, a development analysis by council dated April 28 noted that difficulties getting a lease were "not a suitable justification to penetrate the OLS".

The committee noted that if the tower was shifted "a minimum 700 metres to the west of the subject site" it would no longer pose issues to the airport. However, such relocation would be dependent on Optus being able to secure a new lease.

Optus also reportedly told the committee that it could not reduce the height of the tower on the current site "as the antennas need to be of a height that is above surrounding objects, including trees and topography."