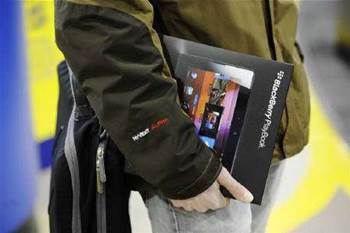 Research In Motion has recalled about 1,000 of its PlayBook tablets which were shipped in the United States with a flawed operating system build that could pose problems during the initial set-up.

The story was broken in technology blog Engadget and has since been reported through several other media channels.

In a statement to CrackBerry.com, the manufacturer of the BlackBerry said the majority of the affected devices were still in the distribution channel and had not reached customers.

The company was working to replace the affected tablets, it said.

The Engadget blog reported on Saturday that the faulty batch was shipped to office supply chain Staples.

RIM had hoped to turn around its fortunes with the launch of the PlayBook tablet, but the product won poor reviews and complaints it was rushed out before it was ready.

Research In Motion and Staples could not immediately be reachedfor comment.

(Reporting by Renju Jose in Bangalore; Editing by David Holmes).