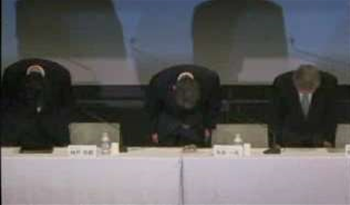 Sony has apologised for a security breach of its PlayStation Network and confirmed that it held 10 million credit card numbers that could have been exposed in the attack.

"First, we'd like to extend our apologies to the many PlayStation Network and Qriocity users ﻿who we inconvenienced and worried because we potentially compromised their customer data," said consumer products boss, Kazuo Hirai on Sunday, before he, Sony's CIO, Shinji Hasejima and head of communications, Shiro Kambe, lowered their heads in an extended bow.

At the Sunday press briefing, Hirai announced Sony would appoint its first chief information security officer (CISO), reporting to Hasejima, as one measure to avoid a reoccurence.