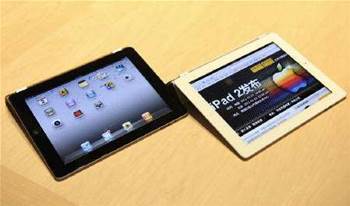 Apple may face shortages of key components for its newly-released iPad 2 as a result of the earthquake in Japan, according to a report released on Thursday.

Several key components in the new version of Apple's popular iPad tablet PC come from Japan, including the battery and the flash memory used to store music and video on the device, according to research firm IHS iSuppli.

The iPad 2 battery, which IHS iSuppli said is "unusually thin", is manufactured by Apple Japan, an Apple subsidiary, and likely requires advanced manufacturing technologies that reside in the country.

"Logistical disruptions may mean that Apple could have difficulties obtaining this battery, and it may not be able to secure supply from an external, non-Japanese source," the report said.

Production at many Japanese manufacturing facilities has come to a halt following Friday's 9.0 earthquake and subsequent tsunami, which has left more than 5,600 people dead and destroyed swaths of the country.

Toshiba, which is one of the companies that produces the NAND flash memory used in the iPad 2 according to IHS iSuppli's research, briefly shut down a flash memory manufacturing facility in Japan and warned it could face hurdles distributing its products.

Suppliers of other components whose factories weren't damaged are likely to be affected by logistical issues, such as difficulties procuring raw materials and shipping finished products, the report said.

Apple launched the iPad 2 in the United States last week to strong demand, with many stores selling out of the device and analysts estimating that the company sold 1 million units during the debut weekend.

The current wait time for an iPad ordered online is 4-5 weeks. Apple declined to say how that would be affected.

On Tuesday, Apple said it would delay the launch of the iPad 2 in Japan as "the country and our teams focus on recovering from the recent disaster." An Apple spokeswoman told Reuters the decision to delay sales had nothing to do with any component shortages.

Among the other iPad 2 components sourced from Japan listed in the IHS iSuppli report are a compass from AKM Semiconductor and DRAM memory produced by Elpida Memory. A touchscreen overlay glass is likely from Asahi Glass, IHS iSuppli said.

The report said that some of these components, particularly the flash and DRAM memory chips, could be procured from alternative suppliers.