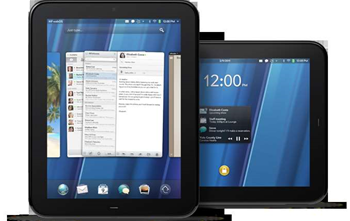 HP has lifted the lid on its highly anticipated 9.7 inch WebOS-based TouchPad.

At 740 grams HP's tablet shares an identical weight to Apple's Wi-Fi +3G iPad, but is a few millimeters smaller.

Similar to Apple's first iPad, HP will offer a 16 and 32 GB version of the TouchPad, but no 64 GB version.

However, the TouchPad comes with a USB 2.0 port, 1.3 megapixel web camera for video calling, and GPS for 3G-enabled devices.

The tablet runs on a 1.2GHz Qualcomm Snapdragon processor and comes with Exchange support and push email for web accounts.

The TouchPad represents a major milestone for HP since it acquired WebOS through the US$1.2 billion acquisition of Palm last year.

HP's tablet will not be available until at least June (US summer).

Unlike Apple, which made much of the iPad's 10 hour battery life, HP did not disclose what the device's expected battery life is. It also did not clarify whether the TouchPad supported Flash, however according to a CNet report it will.