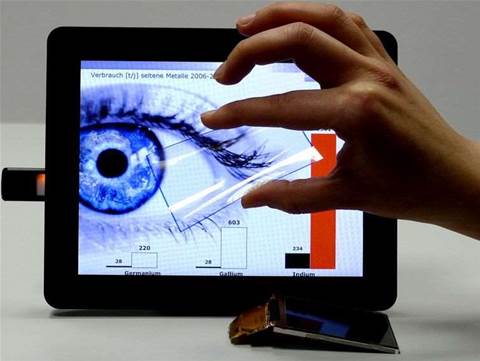 A new touchscreen technology could significantly reduce the costs of user-interface displays, according to scientists from the Fraunhofer Institute in Germany.

The carbon nanotube screens would be built from cheap materials that are available globally, reducing the economic dependence on rare materials that go into today's touchscreens, the scientists said.

Current touchscreens involve a wafer-thin electrode under a glass surface made of indium tin oxide (ITO), but the industry is worried that supplies of ITO are unreliable.

“There are very few deposits of indium anywhere in the world,” the researchers said in a statement. “In the long term, the manufacturers of electronic gadgets are afraid that they will be dependent upon the prices set by suppliers, which is why indium is one of what people call 'strategic metals'."

According to the researchers, their technology could produce screens of a similar quality using materials that are far cheaper, widely available and can be manufactured from renewable sources.

“Its main components are carbon nanotubes and low-cost polymers,” the Fraunhofer team said.

“This new electrode foil is composed of two layers. One is the carrier, a thin foil made of the inexpensive polyethylenterephthalate PET used for making plastic bottles. Then a mixture of carbon nanotubes and electrically conducting polymers is applied to the PET as a solution and forms a thin film when it dries.”

The process, said the scientists, overcame a long-running problem with plastic screens because the carbon elements strengthen the otherwise brittle plastics.

The Fraunhofer team conceded that electrical resistance in the new screens was slightly greater than in ITO, but insisted it was perfectly adequate for touchscreen interaction.

The displays are expected to be unveiled at a nano technology event in Tokyo next month.