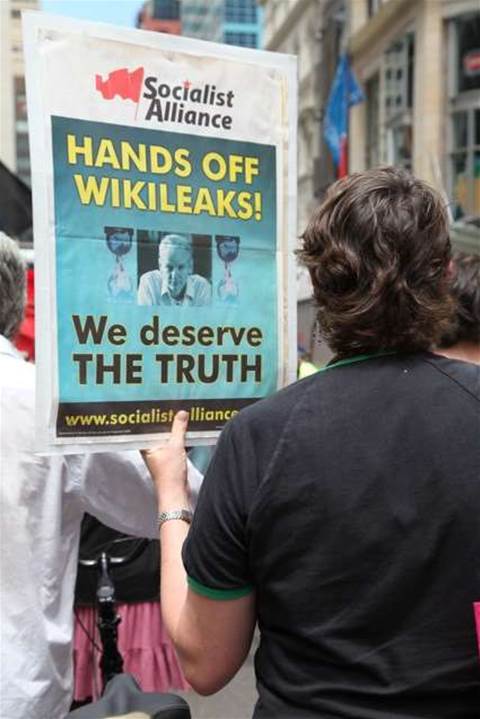 To a chorus of "democracy not hypocrisy" about 500 Wikileaks supporters filed through the heart of Sydney at the weekend calling for the release of alleged whistleblower Bradley Manning and fair treatment for the Australian Julian Assange, as part of an international day of action.

On Saturday, organisers called for a social media uprising and supporters to follow Wikileaks' lead to build similar sites of their own to publish secret documents such as the leaked diplomatic cables that embarrassed the US Government. Police said they estimated 400-450 protesters while organisers said 600 was "optimistic".

"We're not reliant on the mass media any more, we can all publish to a global audience through the blogosphere," Pirate Party member Simon Frew told the rally.

"Big Media has largely abandoned the role of holding governments and corporations to account and it's up to us, ordinary people, to step into the breach and fulfill the role of citizen journalists."

Serkowski said the US Government's move last week to subpoena the social media records of those associated with Wikileaks could be expanded to anyone who has had anything to do with the organisation.

"This McCarthyist attack on free speech activists is a disgusting affront to our democracy," Serkowski said.

The decision by US banks and financial institutions to choke off funds to Wikileaks and Assange was "economic terrorism", he said.

Serkowski stopped short of claiming that Tunisia's 'Jasmine Revolution' uprising last month was fomented by Wikileaks ("the cables simply confirmed those whispers") but drew a line between the tactics used by the African government backed by the West and the US.

"Four members of the Tunisian Pirate Party were arrested without warrant and held without charge," Serkowski said. "We are told one was beaten by police ... for disseminating censorship-breaking software ensuring Tunisians could access information and communication with the outside world."

Earlier in the day, Greens NSW MP David Shoebridge said the Wikileaks project "was about global free speech" and claimed that Sweden's attempts to extradite Assange from Britain to face questions over alleged sexual crimes was part of a US-led conspiracy to shut down the site.

Since Wikileaks started publishing the first of about 250,000 leaked diplomatic cables, US right-wing pundits and politicians have called for Assange to be kidnapped and killed. His legal team feared that were he to be extradited he could wind up in front of a US grand jury believed to be gathering evidence to convict him with espionage, which carries the death penalty.

"Since 2000, Sweden has become one of the strong supporters of the US war on terror, it has a history of supporting rendition" for the purposes of torture in third-party states, Shoebridge said.

Shoebridge said the editors of news publications that had published the leaks were not facing similar censure because they were part of the effort seeking to keep the truth from the public and had failed to hold vested interests to account. He said journalists were "relatively comfortable with the way the establishment works".

"They like having their quiet, offside briefings and feel like they're part of something secret," Shoebridge said.

"Wikileaks has none of that. Wikileaks is a direct attack on the establishment, producing that information to us in an uncensored fashion where we can judge it for ourselves.

"It shows us what the internet can do, a great tool for openness and democracy."

Organisers also rallied the crowd in support of American soldier Bradley Manning, held in solitary confinement in a US military jail under suspicion of having leaked secret and confidential documents to Wikileaks including a 2007 video of US soldiers killing unarmed Iraqi civilians that came to the aid of a Reuters cameraman gunned down by an Apache helicopter.

Ignoring NSW Police entreaties to move on, the peaceful demonstrators stopped for about 15 minutes outside the US Consulate General offices in Sydney shouting up to its 59th floor offices for Manning's release.

The demonstration finished at Hyde Park where Marcus Strom, NSW vice-president of the Australian journalist's union, the Media Entertainment and Arts Alliance, confirmed that Assange was a financial member and should be afforded the same protections as other journalists.

"We are very proud to have Julian Assange as a member of our union," Strom said.

Assange had become "unfinancial" just before Christmas owing to "problems with his credit cards", Strom said, but he was reissued with his credentials last month, his Melbourne lawyer Rob Stary collecting them on his client's behalf.

Strom said Wikileaks was winning the PR battle in this country, which had reined in the earlier strong rhetoric against the site and its publisher from PM Julia Gillard and Attonery-General  Robert McClelland. The Australian Federal Police soon after confirmed Assange broke no Australian laws in publ;ishing the cables.

To a round of applause Strom said the union was working to beef up whistleblower protections to protect "heroes such as Bradley Manning" and he urged those attending to follow Wikileaks' example and donate to Manning's legal defence fund.

While US journalists' associations have offered only tepid support for Assange and Wikileaks, Australia's leading journalists including 2010 Gold Walkley winner political journalist Laurie Oakes have been vocal in their backing, elsewhere speaking publicly and signing petitions in support of its mission.

The Pirate Party plans the next demonstration for February 6 to coincide with Assange's next court appearance.