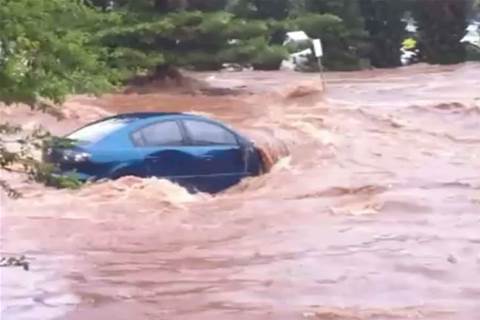 One mirrors flood data, others free up WiFi for neighbours.

Queensland's IT community is doing its level best to keep communications flowing during the State's flood crisis today – with one man mirroring flood information from a faltering Brisbane City Council website, and others opening WiFi channels in their neighbourhood whilst mobile signal gets choked.

The State's official online resources have taken a battering during the flood crisis. Brisbane City Council's website was intermittently offline for most of today and yesterday as residents sought updated projections for flooding in the Queensland capital.

The council's flood flag map was unavailable since yesterday, but a low load, text-only version has since been posted here.

Online community manager Greg Lexiphanic created an partial mirror based on PDFs of flood maps downloaded by individuals on the rare occasions the Brisbane City Council's site was up and running.

"Does anyone have any of the BCC flood flag maps that are currently not online? We should create a temporary archive," Lexiphanic tweeted late yesterday evening.

Minutes later, he tweeted that he had "put together a temp archive of BCC Flood Flag Maps while BCC site is having trouble" – which he intended to pull down as soon as the council's site was back online.

One hour later, he had updated maps of 21 suburbs online. By midday today, he had 60 maps posted.

Lexiphanic told iTnews he had pulled down around half of the maps himself before he had the idea.

"The rest are from people who already had them or managed to get them in the few moments the BCC site was up."

A cursory search of Twitter revealed other heartening stories of techies aiding their fellow man during the crisis.

One user, IT consultant Dennis Dugandzic, offered neighbours in low-lying Fortitude Valley access to his WiFi network in case they were unable to make calls on stressed cellular networks.

Another, Nicholas Perkins, opened up his WiFi network in Coorparoo, asking that neighbours "use responsibly for flood help/info."

Information on networks impacted by the floods is available here.

Donations to the State Government's flood relief effort can be made here.