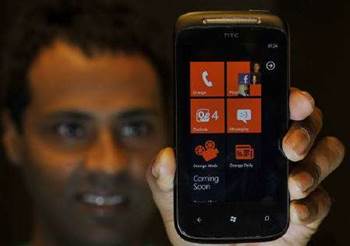 Windows Phone 7, unveiled in October, may be Microsoft's last chance to establish a major presence in a hot market now dominated by Apple and Google, analysts say.

The sales numbers were disclosed for the first time by Achim Berg, vice president of business and marketing for Windows phones, in an internally conducted interview posted on Microsoft's website.

"It's a decent number. The mobile market is going to be a battle for Microsoft," said Colin Gillis, an analyst with BGC Partners who has a "buy" rating on Microsoft.

But he noted that the shipment of 1.5 million phones was sales into the distribution channel, rather than directly into consumers' hands, which tempers the announcement.

Taiwan's HTC, Dell, Samsung Electronics and LG Electronics are among the vendors who have launched or plan to begin selling Phone 7-based devices.

The industry is closely watching the early days of what could be a longer-term driver of growth. Gillis forecasts about 25 million Phone 7 sales in 2011. In contrast, analysts expect Apple to sell more than 60 million iPhones next year.

"We all know that the competition is extreme in this industry, and we have to compete on multiple fronts," Berg said in the interview.

"We are on a path to begin releasing the first of several updates in the next couple of months, and several more mobile operators around the world will introduce Windows Phone 7 on their network in 2011."

Gillis noted that Microsoft is spending US$500 million to market the Windows 7 smartphone, and suggested the company could see market gains by using some of that cash to subsidise the devices so consumers get them for free.