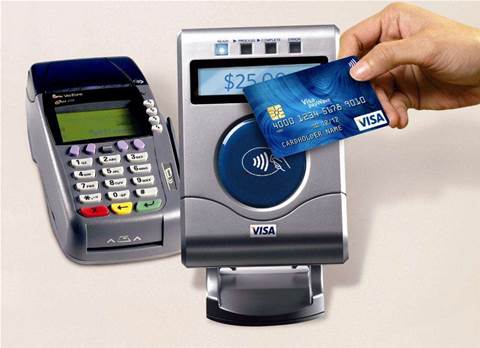 McDonald's Australia will switch on contactless credit card technology this month that enables it to charge cards from up to five centimetres away.

The technology is a feature of Ingenico-Westpac terminals already in use at 816 McDonald's outlets nationwide.

When switched on at the end of this month, it will enable customers to charge up to $100 to Visa payWave or MasterCard PayPass cards without swiping, signatures or PINs.

A Visa spokesman said the contactless payment card technology was based on the EMV standard, and used a secure, embedded microchip and antenna to communicate with card readers.

Card readers 'powered up' a card via radio frequency for each transaction, and transmitted a unique, encrypted code in a process known as 'dynamic card authentication'.

Transactions would then be handled in the same way as traditional Visa transactions, with the same layers of security and theft protection coverage.

Should a customer inadvertently 'wave' two separate, contactless cards at the same time, only the card which the reader picked up first would be charged, the spokesman said.

The spokesman expected Visa payWave cards to be an "unattractive target for criminals" as only smaller transactions would be processed via contactless technology.

Visa payWave cards also would be less susceptible to counterfeit card fraud, the spokesman said, because the EMV chip technology was "virtually impossible to duplicate" and the card would not need to be passed to sales staff during contactless transactions.

And it would be "very difficult" for criminals to make unauthorised transactions because readers were registered to approved merchants so any fraudulent claims would have to be routed through the merchant's financial institution.

"The planning and development of our cashless solution has been in progress for a substantial length of time and pre-dates the events that took place last year," he said.

"This is just one more efficiency that we have introduced to improve the customer experience ... Not only does this offer our customers more flexibility in the way they pay, it also provides them with a highly secure payment method."