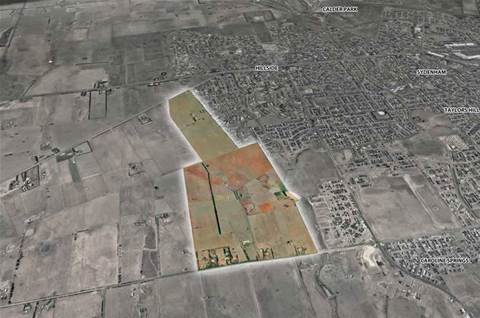 New housing developers in designated growth areas around Melbourne must dig "NBN-ready" pits and pipes accessible by more than one operator's cables in their estates, a Melbourne council said.

The 217 hectare site would support about 2300 new houses when built.

Melton Shire Council that took in the new community and adjacent Caroline Springs was considering the first subdivision of 180 blocks.

The council's general manager of planning and development Luke Shannon told iTnews that estates built before the NBN would be required to give residents an interim telecommunications service.

They could not just leave residents in a telecommunications and internet limbo until the NBN rolled past.

"Because we're not sure when the NBN might hit Taylors Hill West, developers will still need to provide the basic infrastructure, including telecommunications, power, water and gas," Shannon said.

"They'll just be going to the extra level [of deploying NBN-ready pits and pipes as well]."

"The pipe would need to be installed in the road reserve," he said. "They need to install that as they develop each lot."

The road reserve is the land between the kerb and the front line of the private part of a property.

Shannon said that it was possible for a housing developer to make use of the pit-and-pipe infrastructure to roll out a private fibre network ahead of the NBN.

Developers could contract the likes of Telstra Velocity, Opticomm or OPENetworks to do the job - but had to make sure there was still room in the same ducts to support the NBN fibre.

"It's just a single duct but of a size that could cater to multiple uses if needed," Shannon said.

Victoria was pushing ahead with a pit-and-pipe mandate in greenfields estates despite uncertainty at the federal level over a similar mandate.

The federal mandate was due from last July but pushed out to next January. Some industry sites have speculated another delay was on the horizon.

"Informed sources are tipping a further deferral for at least another six months," read a statement on the website of electrical engineers Robin Russell and Associates.

"Keep your eyes [out for] the Telecommunications Legislation Amendment (Fibre Deployment) Bill 2010.

"Until it is adopted by the Senate the industry remains in a state of suspended animation."

Victoria's plan saw agencies amend planning schemes in "growth council" areas in August to "require NBN support infrastructure be installed in the streets for all new developments, so optical fibre broadband could be delivered in the future".

The Growth Area Authority recently designated five areas in the state, rezoning land parcels "to speed up the master planning of 37 new communities" for a total of 90,000 residential blocks of land.

All were required to adhere to the new NBN rules by digging pits-and-pipes.

The master plans were known as precinct structure plans. Apart from the Taylors Hill West plan, there were at least eight more listed at the same stage of development.

iTNews believed that 40 more such plans could be written once the authority completed a new framework following the urban growth boundary rezoning.

The plans were typically drafted with input from developers hoping to build estates in the master plan area.

Shannon said it was a more "holistic approach" to town planning.