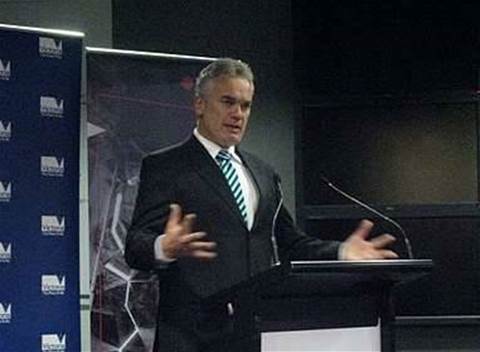 Also wants one million premises on NBN by 2015.

The Victorian Government will fund 160 research jobs at NICTA's Victorian Research Lab at a cost of $33 million as part of an ICT action plan released today.

The additional NICTA funding would "take it through to 2014/15," Lenders said.

Among the NBN-related targets, the state government wanted one million households and businesses to have taken a broadband service over the NBN by 2015.

The State Government also intends to focus on deploying regional backhaul in the state under its $20 million VicFibreLINKS program.

Lenders said the journey to create the action plan had been "complicated" by uncertainty over the NBN project in the lead-up to and immediately after the Federal election.

"But the NBN is locked in, it's certain," Lenders said.

He produced figures that he claimed proved that every new business broadband connection generated $5,000 per year in productivity gains.

And he said that modelling by the state government showed that the Federal Government's 93 percent pledge for fibre-to-the-premises (FTTP) infrastructure could realistically translate to 95 percent in Victoria.

"We continue to present this compelling case to NBN Co," he said.

Lenders said the ICT action plan was a "strong blueprint for a vibrant industry".

"If we are re-elected [when the state goes to the polls on November 27], we've got the action plan to support the ICT industry right here."

"We're delighted the State Government is supportive of that," Piper said.

"It's not necessarily coming out of the Federal Government - where legislation being discussed is looking more at research than the development side of things.

"We think both the 'R' and 'D' are important for Australian businesses. At the moment the Federal Government is looking at research being the most important.

"We hope [the laws] don't change at the Federal level because it would certainly impact Victoria and our members."