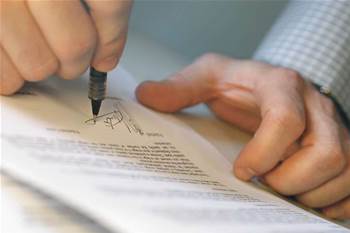 Australia's Department of Foreign Affairs and Trade (DFAT) has sung the praises of a new anti-piracy agreement between 27 nations, releasing the draft text [pdf] overnight.

The final round of negotiations for the Anti-Counterfeiting Trade Agreement (ACTA) were held in Tokyo, Japan, over a ten-day stretch last month.

US officials hailed the agreement as a success for rights holders, but critics said the result was a "far cry" from the tough approach the US had hoped for.

"State of the art" provisions do not include harsh anti-digital rights management (DRM) circumvention penalties or the controversial three strikes rule initially proposed, which would have forced ISPs to monitor their networks throw repeat copyright offenders off the network.

Instead, parties agreed to "promote cooperative efforts within the business community to effectively address copyright or related rights infringement" while preserving competition, freedom of expression, fair process and privacy.

The draft permitted the introduction of a mechanism for a competent authority to force an ISP to hand over subscriber details to a rights holder.

However, any rights holder seeking access to subscriber information must have filed a "legally sufficient claim of infringement".

"The first provision requires an effort to promote cooperative efforts, not new laws. The second provision is permissive - a party may provide new laws, but is not required to do so."

US ACTA ambassador Ron Kirk, however, said the text reflected "tremendous progress" in the fight against counterfeiting and piracy.

Gigi Sohn of the Washington DC-based public interest group and ACTA critic, Public Knowledge, claimed the text "should be seen as a qualified victory for those who want to protect the digital rights of consumers around the world."

Sohn was pleased with the flexibility the final version of the agreement offered to signatories and with the removal of "the most egregious provisions" regarding DRM anti-circumvention and ISP liability.

That the harshest controls proposed under ACTA never made it to the final version, however, was not viewed as a failure by rights holder groups.

"It may not be a precise roadmap, but it is a powerful expression of a common vision and unity of purpose," the US Recording Industry Association of America (RIAA)'s vice president Neil Turkewitz said.

Turkewitz was pleased that "online theft" was officially recognised by parties and that it now had an opportunity to influence the local implementation of the agreement .

Pirate Party Australia president Rodney Serkowski said that the draft text was "in some respects a slightly better document than previous leaked drafts, with some sections being watered down."

"However, at first glance, we don't perceive this draft as being any more benign," he said.

"Changes in the document have only occurred due to significant pressures from NGOs, political parties and concerned lawmakers across the world making countless declarations and objections to both the content and the process based on information gathered from leaked documents."

Throughout the ACTA process, talks have been held behind closed doors. Australia has been represented by DFAT, the Attorney General's department and IP Australia.

DFAT reported that "only a few remaining issues now await resolution" before parties sign the treaty, which had been under discussion for some three years.

The department has long promised iTnews readers that Australia's interest in the treaty would not extend to making any changes to domestic law.

"ACTA is important because we are concerned at the scale and growth of the global trade in counterfeit and pirated goods," he said.

Emerson said that a decision on ratifying the treaty "will only be taken after full public and parliamentary scrutiny.

"ACTA will create a more secure trading environment for Australia's creative and knowledge-intensive industries by ensuring copyright and trademarks are enforced in a number of important foreign markets."

"This is good for our film and music industries, our computer programmers, our authors, and for the protection of famous Australian brands," he said.

"ACTA will provide for the same strong and balanced approach to copyright enforcement that Australia has at home," Crean said.

The ACTA was now due to be signed within days by 27 countries including Australia, Canada, the European Union, Japan, Korea, Morocco, New Zealand, Singapore, Switzerland and the United States.

Critics of the agreement had raised concerns throughout the process that rights holders (the recording and movie industries) had lobbied these governments to create laws that could have adverse impacts on the rights of citizens and the business models of intermediaries such as ISPs and telcos, web hosts and search engines, or universities.