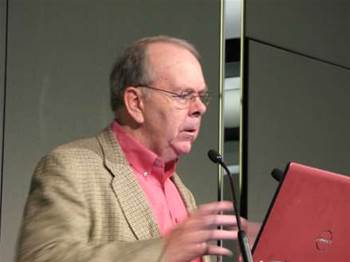 Some of Australia's most illustrious network builders, financial institutions and utilities joined development enthusiasts at the Agile Australia 2010 conference held in Melbourne this week.

They broke large development tasks into a series of iterative steps and were seen as an "alternative to documentation driven, heavyweight software development processes", according to the Agile Manifesto.

The focus was on delivering a releasable, usable product that was reliable and could adapt to changing needs, Manifesto co-author Jim Highsmith (pictured top right) told the conference.

Highsmith pointed out one way of increasing the value of IT was to do less - that is, to deliver only what was needed rather than a laundry list of 'requirements'.

A key part of this was knowing where to stop: if an organisation could derive 90 percent of the potential value of a project from the first 70 percent of the budget, it made sense to complete the high-value elements, stop and move on to the next project.

"You want to do the most valuable stuff first" and reduce any marginal functionality, he said.

"Experience shows that business units may start with a list of say 100 'must have' features, but once they've received the 20 or so most important they are happy to forego the rest," he said.

Suncorp started using Agile around three years ago. One of the first obstacles to overcome was a mindset that 'Agile can't be used for...'

Key principles adopted by Smith included favouring clarity over certainty, course correction over perfection, and simplicity over complexity. "You have to simplify the way things are and the way people work together," he said.

There were results: Smith's organisation was doubling its productivity every year. In addition, it delivered 30 percent more new functionality to business units at lower cost every quarter.

Agile could also translate beyond the IT organisation. Smith has been told to "go Agilise the entire company" and 3,500 people from line-of-business units have already receive Agile training.

Although Michael Bromley was now head of portals and online services at NBN Co and Tony Christensen was its solutions development manager, the duo largely discussed their experience with Agile in previous roles at Telstra.

When Christensen joined Telstra, "the environment was ripe for change" and he was given a project that was 12 months old and struggling. A rigorous requirements document had been produced, and implementation was predicted to take another 18 months. Christensen and his team delivered it in five months.

The project touched around 2,500 business processes and contributed millions of dollars of fresh revenue, which encouraged business units to collaborate on Agile projects.

At NBNCo, the pair were developing an Agile culture and processes. Not everyone believed Agile was the way to go, but the advantage of a greenfields environment was there was no default alternative that naysayers could fall back on. It also helped that the company was Agile in terms of its funding processes.

Musson and Paula Ngov (picture left), senior consultant at software development house DiUS, outlined how Agile was being applied to large projects at the utility company.

Ngov noted the importance of client buy-in and close collaboration, not just to allow the development team to do its job but also so the client had enough time to meet any prerequisites and regulatory requirements.

A large number of stakeholders were potentially impacted by projects, not just internally at Jemena but also externally - for example, its IT services provider, a number of IT subcontractors, as well as the energy market operator.

The key was in making interactions and individuals more important than processes and tools. Close collaboration also removed the need for large amounts of documentation.

Two projects had been completed in the space of a year with another two expected to wrap up in November. Lessons learned included that the business provide a dedicated 'project owner' to the team, and that it would have been better to do all the work in one place rather than splitting it between Melbourne and Sydney. Videoconferencing, remote whiteboard applications and temporarily relocating a pair of team members to the 'other' site helped alleviate the latter.

Allianz wanted innovation and agility with better quality, but Henning had to overcome a perception that Agile developers were cowboys.

That meant mapping some of the outputs associated with traditional development into an Agile framework. The company still had technical specifications, but story cards were used in place of traditional statements of requirements.

Going it alone with Agile led to mixed success, so Allianz brought in Renewtek to provide coaching and training, and "we still partner with them today."

The projects were successful (one was delivered four months ahead of schedule - "the business was very happy with that"), and approval was given to adopt Agile more widely, according to Henning.

"Those successes really helped to get Agile - and particularly Scrum - adopted," said Henning. It was now being used in two big projects at Allianz.

Henning's advice included the need to choose the right projects, take care to work effectively with non-Agile functions (giving them time to deliver what you need), getting the right people on the team (and providing them with training and coaching), and making the effort to understand and engage with critics of Agile.

Have you gone Agile internally? Did it help? What tips can you provide others?