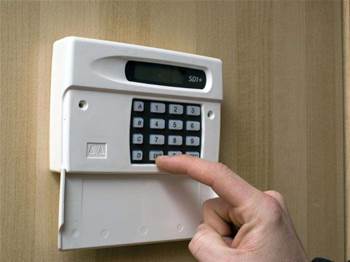 The National Broadband Network has placed the future of more than a million security alarm systems that alert Australians to fire, home invasion, break-in and medical emergency in limbo pending the building of a simulated test bed next year.

The National Broadband Network's architect NBN Co told iTnews it will open its Melbourne test facility next year to security service providers and device makers to qualify their systems in an environment that will "simulate the operational NBN as closely as possible".

The progression to a telecommunications network based on Ethernet optical-fibre will expose alarms that relied on copper networks to provide their power and signals, risking Australians' homes and businesses, said Australian Security Industry Association chief executive officer Bryan de Caires.

The association's concerns stemmed from a meeting it had last December with NBN Co that referred it to the Communications Alliance on the question of systems reintegration and testing with the new broadband network.

De Caires welcomed the subtle shift in NBN Co's policy when told of it by iTnews but was yet to receive official confirmation, he said.

The security group's concerns ranged from the inconvenient ("angry customers woken by their alarm systems beeping" during a nightly NBN upgrade) to life-threatening in the case of medical alarms, de Caires said.

"Under the fibre-optic system there won't be that redundancy and backup [from the copper phone system]. So if it goes down no one will know," de Caires said.

"There's a million alarms that will have to migrate across before the [NBN] rolls out.

"We need to do something about it now and not just wait until the NBN is connected and cut all these alarms off because we believe they need to think that through and work out what the new standard will be."

De Caires said it would take three to five years to move Australia's alarm and monitoring infrastructure to fibre.

Further hobbling the national alarm upgrade was a shortage of skills because many of those who could deploy the new security systems were involved in the NBN rollout, he said.

Most at risk from dysfunctional alarms were the sick and elderly; a failure of their medical alert systems while they were incapacitated could put their lives at risk, he said. Most monitoring systems required two-way phone services to ring back the the patient or alarm in an emergency.

And de Caires said the placing of the junction box presented problems if it was in an insecure area: "If the connection is on the outside [of the premises] someone could just unplug it so it would need to be in a secure box because if you're a burglar you could figure it out".

Owners of obsolete alarms must upgrade or replace them, he said.

In a letter confirming understanding of the issues raised at the December meeting, NBN Co chief technology officer Gary McLaren said the problems the security industry raised were "impacted by all service providers" and that it was important the "issues are addressed across the industry".

"NBN Co as a wholesale-only service provider can only address some of these issues; in the end we will need an industry-wide approach to ensure the best outcome," McLaren wrote.

"The Communications Alliance is leading the way with industry consultation on all technical matters with respect to the NBN.

"I suggest you take up the discussion with Anne Hurley, [then] CEO of Communications Alliance."

Since those discussions, NBN Co has begun work on an analog telephone adaptor to bridge the old copper-reliant systems to the new Ethernet network.

NBN Co said service providers and  vendors "will have the opportunity to test and integrate devices with the NBN Co [adaptor] prior to deploying them in the field".

"NBN Co is in fact taking a proactive role in addressing the migration of legacy systems to the NBN in consultation with industry, vendors and customers," a NBN Co spokesman told iTnews last week.

"While NBN Co has secured premises for the network operations and test facility, the fitout of the facility will take several months to complete.

"The primary purpose of the test bed is to give [service providers] the opportunity to test the integration of their services with the NBN."

Communications Alliance chief executive officer John Stanton told iTnews that alternatives would be found for the alarm technology that relied on the public switched telephone network equipment and that it had working groups solving the puzzle.

He said that by the time the NBN was rolled out the problems would be solved and "alternatives [found] for customers so they can use fibre-based systems".

In a letter sent to the security association, the alliance said that although there were problems in the past with similar network rollouts' impact on legacy alarm systems, it was confident that a solution would be found by its working groups looking at audio reproduction, boxes that housed the optical termination points at the premises, quality-of-service and the network operators themselves.

But it would not commit to maintaining copper services that evolved through "convention" and were not part of published standards, such as supplying voltage when the electricity grid failed.

"Equipment that relies on network or service characteristics that fall outside the relevant specifications but are present as an incidental by-product of the current technology may not continue to function," the alliance wrote the security industry.

"Communications Alliance is not planning to establish a test facility of its own."

And it was up to network operators to choose appropriate audio transmission systems to avoid distortion over the new packet network, it said.