Open-source smart car in 80-day race around the world 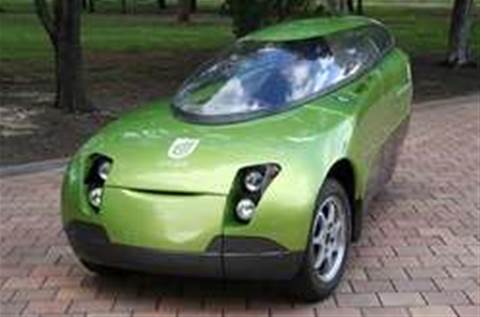 South Australian engineers will take their 350 kilogram, three-wheel electric car to Geneva this month for a zero-emission race around the world.

Dubbed "Trev" or Two-seater Renewable Energy Vehicle, the lime car is Australia’s only entrant to the carbon-neutral Zero Race on 16 August.

It will use 2100 kWh of energy during the 30,000 kilometre race through Moscow, Shanghai, San Francisco and Cancun in Mexico. Lithium polymer battery packs give it a range between charges of 250 kilometres.

But its goals are greater than the 80-day race – "Team Trev" says it could one day be turned into a “build it yourself, power it yourself” kit car for city driving.

“We actively encourage others to use and improve our plans, then to share those improvements with others through www.trevipedia.net,” said Dickson, an engineer at renewable energy developer Wind Prospect who led the University of South Australia's efforts.

He did not have a cost estimate of a Trev kit, noting that a number of Team Trev members had built kit cars before and were enthusiastic about building a kit Trev after the Zero Race.

The car would follow the “usual processes for ensuring roadworthiness” if and when such a kit became available, he said, including complying with state laws for individually constructed vehicles.

Based on current energy requirements of 70Wh per kilometre and assuming a typical daily commute of 32 kilometres, Trev would consume 2.24kWh a day – an amount easily generated by a residential solar panel array, Dickson told iTnews.

“It is conceivable that urban commuting in Trev could be powered entirely from domestic photovoltaic panels,” he said. “A solar photovoltaic system can easily generate the sorts of energy required by Trev for typical commuting.”

“For those without their own solar [photovoltaic] system but still wishing to have emission free transportation, purchasing 100 percent green power at home is a viable alternative.”

Trev will not be completely green for the Zero Race since it will tap into coal, nuclear, hydroelectric, wind, and solar energy grids along the way.

Trev has also won an undisclosed amount of cash and in-kind contributions from Google Australia, whose engineering director Alan Noble said it appealed to his sense of innovation.

The team is seeking "benefactors" to contribute $2500 in exchange for driving the car up to 500 kilometres during the race.