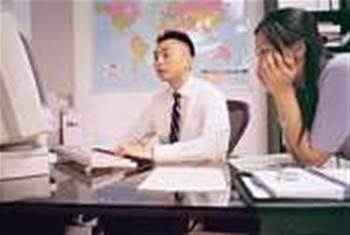 Oracle has released the latest Sun Ray Software 5 update as part of the company's efforts to assimilate its acquisition of Sun Microsystems, and drive a greater share of the desktop virtualisation market with the Sun Ray portfolio.

Oracle claimed that the new features will increase the efficiency of VDI deployments, and broaden support for heterogeneous environments running Microsoft Windows Server and Active Directory, Red Hat Enterprise Linux and SUSE Linux Enterprise Server, including the entire software and hardware stack from applications to disk.

The firm also said that Sun Ray Software 5 (PDF) will improve ease of use with better integration capabilities across a number of server platforms, including Oracle's Enterprise Linux and Solaris products, as well as Red Hat or SUSE Linux equivalents.

The updated software can now enable hot-desking by using the smart card readers of a Sun Ray Client or a supported PC. Enhanced multimedia with bidirectional audio capabilities, meanwhile, will improve the user experience with Windows applications particularly, Oracle said.

"The new features and enhancements, including the breadth of support for heterogeneous environments, enable customers to easily manage and streamline their virtual infrastructure, providing greater security and access while reducing costs," said Wim Coekaerts, Linux and virtualisation engineering senior vice president at Oracle.

Tony Lock, program director at analyst firm Freeform Dynamics said that Oracle's move to broaden the VDI management capabilities of the Sun Ray software is to be welcomed.

"Desktop virtualisation is by no means a single entity," he said. "So anything that helps educate the market on what VDI is, and its very different uses, is a good thing."

Lock added that the update is evidence that Oracle may be trying to enlarge the currently niche Sun Ray market by attracting new customers, and enabling existing users to broaden their deployments to other areas of the infrastructure stack.

Got a news tip for our journalists? Share it with us anonymously here.
Copyright ©v3.co.uk
Tags:
linuxoracleraysoftwaresunvirtualisation