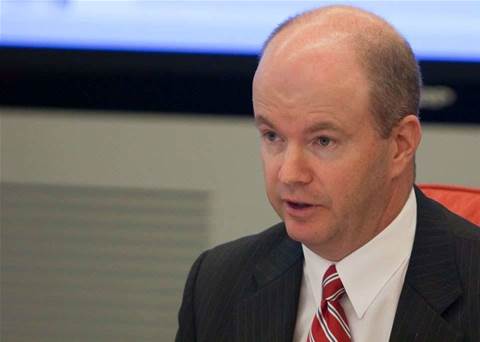 Telco to merge IT and network teams under Telstra Operations.

Telstra chief information officer John McInerney has resigned from the company, effective immediately, as the company looks to merge its IT and network operations.

McInerney [pictured, right], a seven-year veteran of the telco and long-time contributor to Telstra's long IT transformation program, has been working in senior IT roles for the telco since mid-2007 and was promoted to the role of CIO in November 2008.

McInerney has been on extended leave for several months, but has decided not to return to the company.

Acting CIO Ashley Lazaro (interviewed below) will continue in the acting role whilst a permanent replacement is sought.

Telstra chief operating officer Michael Rocca credited McInerney for "driving the delivery of simplified customer relationship and improved billing solutions, Siebel and Keenan" and "streamlining the number of our strategic IT partners and simplifying sourcing arrangements."

In its latest update, Telstra said that only a small percentage of customers remain on older systems - the last of which were the most difficult to migrate to the new system.

"John has decided it is the right time for him to take the next step in his career," Rocca said.

The CIO's departure came as Rocca announced that Telstra is looking to merge its IT and network teams, which will both come under his responsibility as chief of operations.

Rocca said the company will "continue to integrate our network and information technology expertise - including an integrated strategy for managing network and data centres within Telstra Operations."

As of today, staff in Telstra's network team and Telstra's IT division will be paired. The network services group, for example, will merge with IT's server management group.

"The lines between communications technologies - IT and network - are converging and this will continue as network virtualisation becomes more and more common," Rocca explained.

Earlier this month, Telstra announced it would consolidate down to two major data centres in Sydney and Melbourne and build a series of small exchange-sized "network media centres."

Acting CIO Ashley Lazaro talks cloud computing. He will remain in charge of Telstra's IT whilst a permanent CIO is sought.