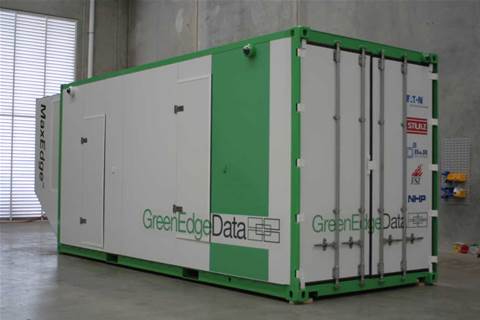 The company has selected a 2000 square metre site in Melbourne and a smaller demonstration site in Brisbane on which it will warehouse its container data centres.

Simon Dawson, managing director of GreenEdge Data told iTnews the Melbourne facility will host between 144 and 288 server racks within multiple containerised server rooms, each capable of between 7 and 15 kW per rack - capable of fitting two to three blade server chassis per rack in power terms.

Negotiations are still underway in regards to attaining dual power feeds and communications, with the networks of Telstra, Nextgen and Soul/TPG the likely candidates in the latter category.

Dawson, who was previously a sales manager at Dell systems integrator Micro Network Services, claims the company has access to private finance for the build out of both facilities. The company recently hired former Digital River chairman Brian Evans (formerly of Uecomm and Dimension Data) to aid its ambitions.

It sells small 20-foot containers with five high density server racks (at 7 to 15 kW per rack) in a hot aisle/cold aisle configuration with UPS systems and cooling, plus larger containers up to 40 feet long that hold up to 14 racks each and are able to connect together as per an organisation's needs.

"You just plug in your comms and power connections, slide in your servers and its ready to go," Dawson said.


The company provides five-year manufacturer supported warranties on its containerised data centres, so that organisations can swap in and out their infrastructure needs as technology changes.

"Within five years, there will always be another scale of racks and air conditioning systems," Dawson said. "Using containers, you can simply park a new container next to the old one at the end of five years and transfer the data across.

"Its a more efficient way to build a data centre - your growth can be scaled," he said.

Dawson revealed plans for the Melbourne site to be fitted with what Dawson describes as "multigen power" - using gas turbines to generate power on-site, as well as relying on dual-feed access to the electricity grid.

This means that the grid will essentially power the facility, while the gas turbine generates power that feeds back into the grid to off-set its use. Should there be an outage in the grid, the data centre's power requirements will automatically switch over to the gas turbines and - should they fail - standard diesel generators will be on standby in the wings.

The air conditioning system will also rely on a technique the company calls "indirect free air", but Dawson refused to provide any details as to what this means.

He said he felt it was "too early" for Australian organisations to move to direct free cooling, in which data centres are cooled by ambient outside air whenever it drops to a temperature cooler than the air inside the facility.

"We are not going to put our name to something that isn't 100 percent reliable," he said.

GreenEdge's mysterious "indirect air" solution still achieves PUE (power usage effectiveness - a measurement of the total power consumed divided by the power consumed by the computing equipment specifically) of 1.1 to 1.2, he said.

"When you're only using ten to twenty percent of your power on cooling, you are doing well."

Whilst the containerised solution has proved popular overseas, very few have been adopted in Australia to date.

Industry luminaries such as Bevan Slattery, meanwhile, are building concrete bunker data centres and are reticent to invest in containerised data centre facilities stored in facilities akin to a "Bunnings Warehouse."

But Dawson insists the facilities will be "high security". Customers will require a fingerprint check to enter the facility, a swipe card to enter their own container and can even opt for secured racks if they desire an extra level of security.

Dawson said many customers don't have the time to wait for a new high density concrete facility to be built.

"If you are building a traditional data centre from scratch, its 12 to 18 months away," he said. "The market is already under-serviced.

"We can take on a customer and deliver a high density facility that is up and running in 20 weeks. And best of all you don't need 50 racks to make the economics of it work."