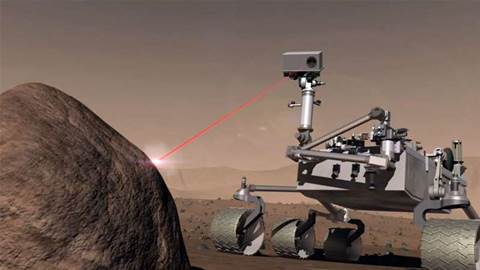 The Mars Rover Spirit has commenced winter operations from what is now its permanent home on the red planet.

On January 4th 2004, Spirit carefully landed on the alien planet for what was expected to be a three-month mission.

However, more than six years later and despite getting stuck in soft soil last May, Spirit is still performing some fascinating scientific experiments.

In its new role as a stationary research lab, Spirit will track minute wobbles in the rotation of Mars, which will teach scientists about the planet's core. The rover will also study the composition of nearby soil, watch how the wind moves soil particles, and monitor the Martian atmosphere - assuming it survives the winter.

As Spirit charges its batteries using solar energy -- which is a little scarce during the 90-or-so days of the Martian Winter - it will communicate with Earth just once a week, as long as power permits.

Spirit has been analysing rocks and geological formations on the planet and has travelled a total of 7.7kms.

Spirit's twin, Opportunity, landed three weeks after Spirit, on the other side of the planet, which has been far less testing on its mechanics. Opportunity has travelled nearly 20 kilometres and is still mobile. It is now enroute to explore the so-called Endeavour crater.

Both Rovers 'see' using nine cameras, one of which is a microscopic imager that takes 1024x1024 close-up images of rocks and soil.

They are also equipped with a powerful grinder to expose fresh rock surfaces and three spectrometers, which help identify the materials by collecting and analysing light.