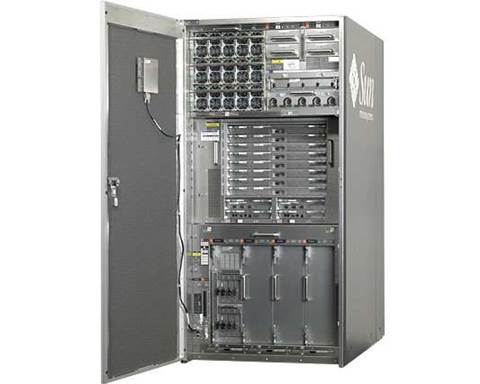 Canberra Data Centres calls for an "end to the raised floor data centre".

Canberra Data Centres has called for the "end to the raised floor data centre" after highlighting the success of a recent customer migration to a pod-based design, which iTnews understands to be Centrelink.

As reported exclusively on iTnews, Centrelink kitted out two Sun M9000 servers [pictured] and two Hitachi USP-V SAN storage boxes in a customised pod within the Canberra Data Centre in September 2009. iTnews understands that within the next fortnight the agency will install a further four of the beastly servers in an adjacent pod.

Whilst Boorer went to great lengths to obscure the details of the customer, iTnews has been able to verify that the case study customer was Centrelink.

Boorer told the audience that customers were slowly being won over to the pod format after expressing original hesitation.

iTnews has confirmed that Centrelink's original resistance to the format was due to concerns over how much effort was required in designing the layout of equipment within the pod in advance of the build.

"The problem with the custom pod approach is that you force us to undertake more pre-planning and deployment design than we ordinarily would in one of our traditional data centres," a Centrelink engineer had replied to CDC's pod proposal.

Judging by the timeline of the rollout to date, it would appear that the design phase has indeed been a long one. But according to Boorer, the results were worth the wait.

Boorer explained that the customer had sought 500 square metres of floor space, but Canberra Data Centre had fit the same amount of computing in a mere 120 square metres (one standard pod and two custom pods). In any other ASIO-certified data centre, he said, that 380 square metres of shared floor space would have cost $1.9 million a year (380 x $5000 per year).

"You shoot air into the raised floor at 6 or 7 degrees in order to get it to a particular point under the racks, so by the time it enters the racks it is 18 or 19 degrees, it gets warmer as it rises through rack, comes out at 28 or 29 degrees, and rises further in temperature as it travels back to CRAC unit at 36 and 37 degrees," Boorer said.

In the pod environment, he said, the air is coming into the inlet at 23 or 24 degrees, is pushed through the racks, captured in hot aisle and immediately treated at the heat source (where heat is produced) at 28 degrees - producing a delta of only four degrees.

"The air doesn't have time to sit and get hotter," he said.

The air conditioning and power required to cool air by a factor of four degrees is considerably lower than trying to reduce temperatures by 30 degrees, he said. Further, the pod environment allows for cooling to be monitored and controlled at a granular level, providing more consistent temperatures to computing equipment.

WIth $1 million per year of power savings and $1.9 million a year of real estate savings, Boorer estimated that the agency would save $15 million over the five year term of the contract - well worth the effort of making a greater investment in time designing the pod from the outset.

"You have to shake yourself out of your comfort zones and keep an open mind to this kind of infrastructure," he told the audience.

"It seems you are on one side or the other," he said, referring to the traditional raised floor approach versus pod-based designs.

"From my perspective, a raised floor only has certain amount of cooling capacity. It is a noose around your neck and at some stage someone will tighten it, its only a matter of when.

Boorer said the case study proved that pod-based designs are "not cutting edge", simply a better way of building a data centre.

"The Commonwealth Government is arguably the most conservative bunch of IT users in Australia today, and they are embracing this. Why wouldn't more people embrace it?"