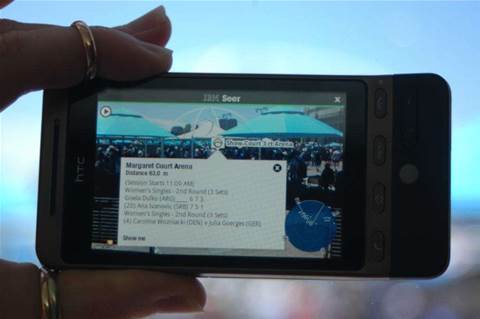 What to expect from augmented reality.

Nokia has commissioned the development of 'x-ray vision' technology for its mobile phones.

The technology has been in development at the University of South Australia (UniSA) since November 2009 and comprised 'Augmented Reality' software that allowed users to see through walls to navigate.

Augmented reality involved overlaying contextual information on a user's view of the world. Displays featuring such information in helmets or spectacles have been theorised, but current technology tended to be based on mobile phones.

According to Christian Sandor of the university's Magic Vision Lab, it was not until GPS technology had sufficiently improved that augmented reality could take off commercially.

"Imagine that you have a cell phone with a video stream. You can add computer graphics to the image to add information to what is coming from the camera," he explained.

"The fundamental issue is you have to find out where the camera is in the real world," he told iTnews. "GPS was not precise enough."

In the US last August, social review service Yelp introduced a feature that displayed information about nearby locations, by using the map and compass of the iPhone 3Gs.

Meanwhile, Tweakersoft's Aroundme application detected nearby banks, cafes, bars and ATMs and could be used in Australia. It was featured in TIME's list of the top 10 iPhone Apps of 2008.

IBM also has been investigating augmented reality and its potentials. Its 'Seer' application for the Android smartphone platform (pictured) was introduced at last year's Wimbledon Championships and embedded live statistics and player information onto a camera feed from the user's device.

When Seer came to the Australian Open in January, it sparked discussions with local clients about how augmented reality could be used in their businesses, said Sarah Cole, a Sydney-based sponsorship manager at IBM Global Services.

"For is, it was about starting a discussion about what's possible in the future," she told iTnews. "There was a lot of interest for the IBM sales team ... from the finance sector."

At IBM, augmented reality was in its embryonic stages, with most research and internal applications being performed and developed in the US, Cole said.

"We're looking at what's an appropriate platform that we should look at, and what would be of interest to people," she said, mentioning Windows Mobile devices and the iPhone as possibilities for Seer.

Expecting an "explosion" of augmented reality applications and creativity to arise from the availability of smartphones, Fenn warned that the resultant hype around the technology could lead to inflated expectations.

"Everybody feels like they've got to do it because everybody else is," she said.

"Certainly, you need a position on it; but if you are moving to adopt it at this stage, where it's still evolving, you need to be clear about why and what its value proposition is."

Most of the applications had been developed by engineers, he said, asserting the importance of a user-centric design that "even my grandmother" could use.

This year, he planned to work with Nokia to implement the x-ray vision technology. The technology had been using a custom-built 3D map of Adelaide to "see through buildings" and reveal points of interest; however, Sandor hoped to reach an agreement with Google about using Google Earth.

Sandor also planned to commercialise two other augmented reality technologies, dubbed 'Meltvision' and 'Distortvision', both of which had been filed as a patent by the university.

He was in discussion with investors about further developing the technology for the iPhone, Blackberry and Android platform, he said.