Video: LHC on the brink of 7 TeV 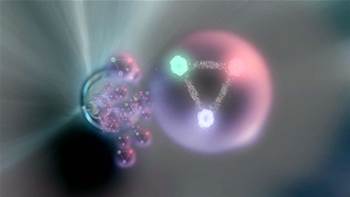 CERN Large Hadron Collider to be revved up this month.

The Large Hadron Collider (LHC) is on track to be producing high energy collisions by the end of the month.

Particle beams will collide at an energy of 7 teraelectronvolts (TeV), which is 7 million, million electronvolts.

The LHC, which cost more than $10 billion and has been in development for eight years, successfully produced 2.36 TeV collisions just before it closed down for the Christmas holidays.

Built on the French/Swiss border, the LHC is located in a circular tunnel that has a circumference of 27 km and is up to 175 m deep underground.

Protons are fed into one end and then sped up to almost 300 million m/s, which is the speed of light, when they are smashed into protons coming from the opposite direction.

Four detectors with different instruments are placed around the LHC to monitor the collisions.

According to the European Organisation for Nuclear Research, CERN, the high power collisions will mark the beginning of the particle accelerator's physics programme.

The LHC is best known for its potential to verify the existence of the Higgs Boson, which is said to be responsible for mass.

7 TeV is still only half of the collision energy that the LHC has been designed to observe. CERN plans to run the LHC continuously for the next 18 to 24 months, after which it will be shut down and ramped up to operate at a collision energy of 14 TeV.

CERN does not expect discoveries to be made on what it has dubbed the 'LHC First Physics Day', but says it will be a major advance in particle physics.

The move up to 7 TeV collisions follows a series of setbacks since the LHC began operating in September 2008.

A coolant leak after only nine days into operation caused it to be shut down for a year. Two weeks before the LHC was due to resume in November 2009, a rogue piece of bread was blamed for overheating in some sections of the particle accelerator.

Barring any further technical issues, CERN's Director General Rolf Heuer believes the LHC has a "real chance" during the next two years of discovering supersymmetric particles like the Higgs Boson.

It could shed light on the nature of dark matter, which is said to account for a quarter of the mass and energy of the Universe, he said.