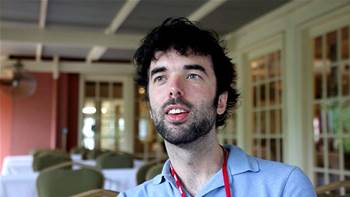 Also teaches Google something about search.

US-based startup Xobni (inbox spelt backwards) seems to be onto a winner with its dynamic address book, which pulls information from multiple sources, including social networking sites, to provide an address book that is always updated without any duplicates.

The original and most popular version of Xobni is an add-on for Microsoft Outlook. Once installed, when a user views an email, a box on the right side of the screen displays information about the email sender, including their name, address, contact details, a photograph, as well as details about mutual friends, recent conversations and lists recent attachments or files that have been exchanged.

Xobni, which was founded four years ago, is currently running a beta test of application for the Blackberry smartphone. Co-founder Adam Smith Xobni told iTnews.com.au that the company hopes to release versions for at least one more platform before the end of the year.

At the Kickstart conference in Queensland this week, Smith said Xobni had chosen to focus on Outlook because of its popularity but was now at a stage where it could more easily scale its application to other platforms.

"We have chosen mobile as the first next step but it has taken us a while to build the Blackberry product because we have taken the time to build out our vision for how the address book of the future should work - and that has a cloud piece to it.

Smith said the Blackberry was an obvious next step because so many Outlook users also use the device. However, he said iPhone users will likely miss out unless Apple changes the iPhone APIs.

"Xobni for Outlook would not work if we could not put the sidebar in the main compose window. Over time I think the iPhone will open up so we can provide the right user experience," said Smith.

He expects Xobni to make greater moves into the enterprise with the Xobni server and extensions for Salesforce.com, Microsoft Sharepoint and LDAP support.

In this short video, Smith demonstrates Xobni and explains what he could teach Google about desktop search.

Two years ago, Bill Gates called Xobni "the next generation of social networking” here he demonstrates how Xobni "adds value" to Outlook.