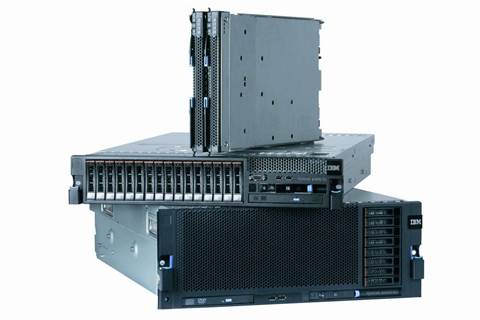 IBM has claimed that today's virtualised farms of commodity x86 servers represent a fundamentally broken model for enterprise computing, launching at CeBIT what it calls the "first major overhaul" of the x86 server platform in thirty years.

In a bold (and at times, hyperbolic) statement, IBM said its new eX5 server platform, built on Intel's Nehalem EX processor and IBM's X Architecture chipset, is the first to effectively "decouple" memory performance and capacity from the processor - which enables its memory capacity to scale up to six times other servers in its class.

"It will change the rules," said Peter Hedges, business development manager at IBM's Systems and Technology Group. "HP has been put on notice."

IBM claims that in the current generation of x86 servers, the capacity and performance of memory is "a function of the processor chip."

In the eX5 series, IBM claims to have "expanded the capacity and performance of memory in a server beyond the capabilities of the processor," Hedges explained.

Hedges said that a four socket server usually has a memory limit of 16 DIMM (Dual In-line Memory Module) slots. IBM claims a four-socket eX5 can accommodate 64 DIMM slots out of the box and 96 DIMM slots snapping on an additional module.

IBRS analyst Kevin McIsaac said that with compute power doubling every 18 months and more workloads being added per processor courtesy of server virtualisation, many enterprise IT shops are running out of memory. But he, like iTnews, was perplexed by what IBM claims to have done to address the issue.

Hedges said that "the magic of the eX5 is in the X [Architecture] chipset" - a propreitary IBM technology - that helps to virtualise [abstract] the memory from what the processor can see."

Craig Allen, CTO of IBM business partner Virtual Offis, has been trialling an eX5 system for a week, and has a simpler explanation. Big Blue has simply provided a greater number of memory slots per processor, he said, and is using multiple buses to maintain speed during heavy load.

"When you start going to a multi-gigabyte RAM environment, you usually need to reduce the bus speed," he said. "Once you are calling on that much memory, the pipe is only so big. One of either Intel or IBM has found a way to split that memory usage up. The trickery of this, I suspect, is that there are two sets of logic - one for the buses, one for the CPU."

McIsaac said enterprise buyers need not get caught up into the nitty gritty detail of how IBM has improved memory performance, but focus instead on what business outcomes may come of it.

"This is nothing revolutionary," he assured. "It is more likely the natural evolution of the x86 platform. All we need to know is that IBM - by whatever sprinkle of propreitary magic dust it's managed to throw on the memory interconnect - has changed how the memory is connected to the processor.

"The bottom line for your business is, you can run more workloads on a two-processor machine.  Intel-based boxes are continuing to become enterprise-class."

Hedges said that the strategy of stacking up rows of commodity x86 servers, controlled with virtualisation software from the likes of VMware and Microsoft, is a broken approach.

IBM said that enterprise IT shops have been "throwing more servers" at the increased workloads of their applications, leading to server sprawl and higher power and management costs.

"HP is quite happy selling lots of standard commodity two-socket servers for virtualisation," Hedges said. "That's great for profit optimisation and HP's supply chain. But it is not optimal - it means lots of VMware licences, lots of cabling, lots of space in your data centre and lots of power consumption."

But a server with greater memory capacity, he said, means the same number of workloads can run on less processors, immediately saving on VMware licensing (which is charged on a "per processor" basis).

IBM claimed that using eX5, customers could increase the number of virtual machines by 78 percent at the same licence cost, and save 50 percent on their licensing fees overall.

McIsaac said this was an important development - many organisations are basing their enterprise system decisions not on architecture, but on the best outcome from a software licensing perspective.

But Hedges said individual racks and blades can also be "snapped together" and share memory, scaling up in terms of computing expansion with each module. IBM may license the technology required to do this - a technology it terms "FlexNode" - separately, but has not revealed any pricing or availability.

Big Blue will only do so when Intel launches the Nehalem EX processor, a date for which has not been set.

McIsaac said that the benchmarks of the Nehalem EX - particularly for running virtual workloads - are "phenomenal."

"I've read that it is something like twice the performance on VMware," he said.

"IBM will come out and say they have done the best job [on Nehalem EX]," he said. "And it certainly appears that IBM has leapfrogged older generations of its own and everyone else's server technology. But how long will they keep that competitive advantage? No more than six or nine months I imagine.

"As a buyer, don't get caught up in the tech specs. Just focus on ways to reduce the box cost and more importantly the software licensing costs."

Hedges nonetheless insisted that the innovation of the eX5 is completely attributable to IBM's chipset technology - not the Intel processor - and specifically the way in which IBM extends the memory capability of a machine.

Intel's other major server hardware partners - Dell and HP - were unavailable for comment.

While no specs are available to date, Hedges said the first three workload optimised devices will include a database edition, a virtualisation edition and a Websphere (web server) edition.

The company boasted that organisations could enjoy the same performance as "800 spinning disks" using Flash and slash storage costs by "97 percent".