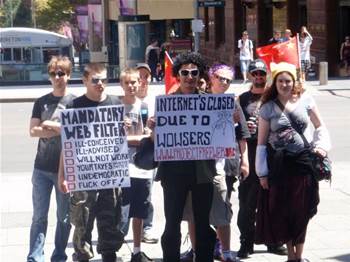 A small contingent of anti-censorship protesters descended on central Sydney today to rally against the Federal Government’s internet filter plans.

The protest (see photo gallery right) was off to a late start with only NSW Police officers in attendance at midday. All but one officer left after a quarter of an hour.

It became apparent a group forming further up Martin Place was the Project Freeweb protest.

After 45 minutes, the group - numbering approximately 20 - made their way down the Place and set up outside Channel Seven’s city studios.

The lone police officer was reported to have jokingly told the protesters they “should be ashamed” because they managed less numbers than an earlier rally against the cancellation of this year’s high school Rock Eisteddfod Challenge.

He farewelled the protest group, which had thinned in numbers but was bolstered by several placards and some photocopied leaflets.

“We are incredibly lucky to live in a time of such readily available data, but if we don’t act now it may be gone,” the leaflet said.

“It [the filter] may seem innocuous enough now, but where does it lead? If the Government claims the power to control what we hear and see, what’s next?”

Project Freeweb protests were due to occur nationwide. Another separate national day of action, backed by Electronic Frontiers Australia, was due to take place on March 6th.

Update: Project Freeweb has updated its website status: "Protests were held by Anonymous all over Australia on Saturday, 20th Feburary 2010 in a global movement to end Internet censorship.

"Nobody showed up and those that did f****d off to the pub within the first hour. Take that [Kevin Rudd]!!!".

An image from another protest location was captioned: "They came in the... tens. LULZ."