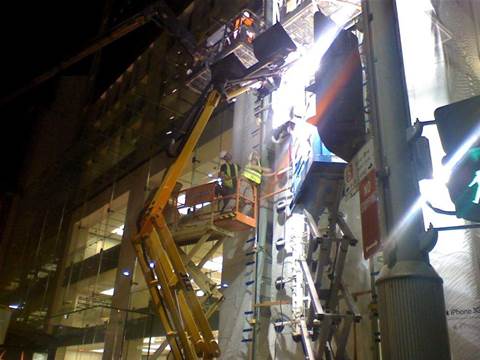 New glass and pane remover shipped in from Germany.

Apple has been forced to replace a 10 metre pane of glass on the façade of its flagship Sydney store after it was pierced by a small projectile last month (see photo gallery right).

The repair job was understood to have cost Apple up to $1 million to date.

Apple has been contacted for confirmation.

Engineers and workers from the firm Kell & Rigby, alongside glaziers and contractors that worked on the original construction of the building, converged on the store last night.

George Street - one of Sydney CBD's busiest roads - was cut to a single lane at 8.20pm for the operation, which was understood to be the first of its kind ever attempted.

But the replacement was abandoned shortly after 2.00am due to an unknown mechanical fault with the crane-assisted plate glass remover.

The remover - covered in suction caps and able to rotate 180 degrees to span the entire pane of glass - was custom-fabricated and flown from Germany specifically for the job.

A replacement pane of the store's custom four-inch thick glass also had to be flown in from Germany.

The pane remover was hoisted into place against the glass just after midnight this morning but appeared to fail to pressurise and grip the window correctly.

Running repairs were made at approximately 12.45am and again at 1.20am and 2.00am before the replacement attempt was abandoned for the evening.

The repair job was expected to resume later tonight, subject to planning approval.

The glass had to be replaced after Sydney's flagship Apple store was one of a number of shopfronts allegedly targeted by an unknown vandal late last month.

Rumours on the Macworld forums claimed a bullet had pierced the glass, but this has not been confirmed by Apple.

The hole through the glass pane was clearly visible prior to the commencement of works last night. A hairline fracture in the glass extended from the hole at eye level to almost two-thirds up the pane.

It was understood the glass fracture was caused by the sun's heat rather than the impact of the initial hit.

Workers sealed the fracture with plastic tape and fitted edging materials to the sides of adjoining glass panels to prevent damage to other panes as the damaged glass is removed.

Read about Kell & Rigby's lessons-learned on the initial installation of the glass panels here [PDF].