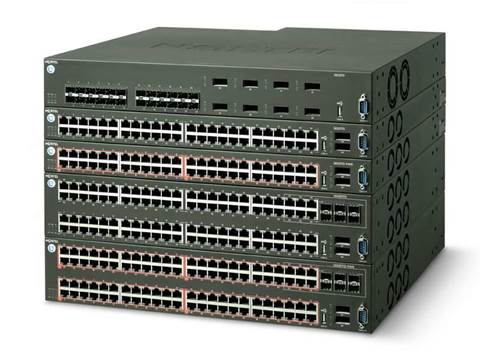 The networking vendor said that deploying a powerful, high-performance data network is vital in allowing infrastructures to support video and real-time applications critical to unified communications.

The
new five-switch family, which includes two Power-over-Ethernet (PoE) models, have advanced features enabling the switches to be used in the edge, distribution and core layers of the network, according to Nortel enterprise solutions president Joel Hackney.

Up to eight 5600 units can be stacked together, and all models are stack-compatible with Nortel's earlier ERS 5500 switch family.

The switch offers full interoperability with all equipment conforming to the IEEE 802.3af standard, Nortel said, and the flexibility to power multiple vendors' devices.

Nortel is offering three base models: the ERS 5632, 5650 and 5698; the 5632 model is tasked with supporting server aggregation. The 5632 can also support a small-to-medium core network by virtue of its 24Gb small form-factor ports (SFP) and eight 10Gb XFP optical ports.

The 5650 and 5698 models also come in PoE options aimed at desktop connectivity and server aggregation roles. The 5650 has 48Gb copper and two 10Gb XFP connections, while the 5698 doubles the copper port count to 96Gb and adds two 1Gb SFP ports alongside the two 10Gb XFP ports.

All models are available now.

Got a news tip for our journalists? Share it with us anonymously here.
Copyright ©v3.co.uk
Tags:
10gb models network networking nortel switch two
By Dave Bailey
Jan 14 2009
6:42AM