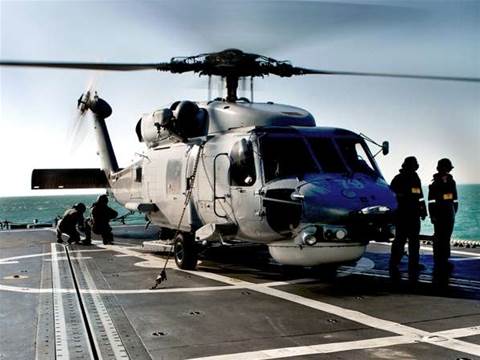 A torpedo-shaped autonomous underwater vehicle was used to scan the base of Sydney Harbour at Barangaroo prior to the Pope’s arrival in July.

The resulting images were examined by the Navy before divers were deployed to investigate any suspicious objects.

The operation was conducted by the Australian Navy in partnership with the Defence Science and Technology Organisation (DSTO).

Similar surveys were conducted prior to the Sydney Olympics, the Commonwealth Heads of Government Meeting (CHOGM) in Brisbane, and the Commonwealth Games in Melbourne, according to scientists at yesterday’s DSTO opening in Sydney.

“There is a factor of 10 to 13 in time savings in using AUVs to conduct a survey rather than a diver,” said Dr Bernard Kachoyan, head of maritime security - maritime operations division at DSTO.

Kachoyan and other DSTO scientists and researchers demonstrated a number of technologies that the DSTO is refining at its new Sydney facility. These included several three dimensional (3D) imaging systems.

The Sydney Harbour model alone is made up of as many as 7,500 3D entities.

DSTO is currently working on ways to combine this geospatial data with satellite imagery to create complex 3D visualisations on-demand.

“We want to make it a much more efficient and automated process – so if Defence goes somewhere, we can provide a 3D model of [the place].”

DSTO is also working to ensure the system is ‘portable’ and able to be processed on what it called ‘high-end PCs’.

Kachoyan also highlighted the automated identification system (AIS) software, which tracks the name, speed and location of all ships over 300 tonnes.

The system enables Defence to create a ‘spaghetti trace’ and locate suspicious patterns of behaviour in shipping movements.

“We try to find patterns that are out of the ordinary – for example, mapping how many vessels cross over telecommunications tunnels,” said Kachoyan.

Kachoyan showed a basic demonstration in which AIS data was passed through an unspecified translator and surfaced onto a Google Map.

Kachoyan was able to zoom in on a particular vessel in 2D and hover over the outline to get information on it – however, he cautioned that independent confirmation of the data would be required.

JSAF currently is used for computer-assisted war-games. Teams are divided into different rooms and receive virtual simulations of what they could expect to have available to them in a real-world environment.
Got a news tip for our journalists? Share it with us anonymously here.