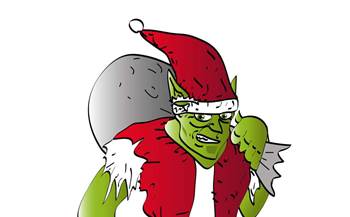 Sites shut down on Christmas Eve.

According to several reports, the retailers' sites were taken offline, forcing late-to-the-game gifters to take their holiday spending cash elsewhere for roughly an hour.

Neustar, the company that provides the DNS services under its UltraDNS brand name told PC World that the problem was discovered and righted in less than an hour.

"At 7:45 p.m. Eastern Time we noticed an abnormal spike in queries and immediately identified it as a DDoS attack," said Allen Goldberg, Neustar's vice president of corporate communications, adding that Neustar analyzed the attack pattern and was able to limit its effects within minutes of identifying the problem.

"We had everything under control in well under an hour. The attack was limited to Northern California users."

Some smaller retailers that use Amazon Web Services for Web site hosting were also taken down by the attack, as the DDoS attack affected Amazon's S3 and EC2 cloud services for a brief period.

The attack is similar to a DDoS attack against UltraDNS earlier this year. That attack took out Amazon, Salesforce.com and other sites.

Neustar has said that Wednesday's attack was smaller in reach than the previous attack and that it affected fewer customers.

Got a news tip for our journalists? Share it with us anonymously here.
Copyright © 2018 The Channel Company, LLC. All rights reserved.
Tags:
againstamazonattackddosdnsholidaysecurity