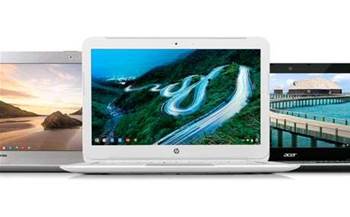 Third-quarter worldwide PC sales were stronger than expected, but still down 7.6 percent, according to IDC's PC market study released Wednesday. This quarter's big winners were Google Chromebooks, Lenovo and a strong United States market for PCs that helped prevent sagging PC sales from dropping to 9.5 percent, as originally forecast.

According to IDC, the PC market was buoyed by business purchases and companies updating to Windows 8.1-based systems in September. The top three worldwide vendors were Lenovo, HP and Dell, which all saw modest positive year-on-year growth, IDC reported.

On the flip side, Apple's US computer shipments shrunk 11.2 percent. Rajani Singh, IDC senior research analyst, personal computers, said Apple's poor performance was due in large part to pent-up demand for new models. "Apple was hurt by the fact it didn't come out with any new models," Singh said.

Consumer-centric Acer and Asus were two of the biggest market share losers this quarter, with each seeing worldwide shipments drop 34 percent compared to last year. IDC said the dip is due to the fact that consumer sales were down this past quarter.

Trouble spots around the world also contributed to lackluster sales. Lenovo was hurt by financial problems facing the Asia Pacific market. Despite those struggles, Lenovo grew worldwide shipments 2 percent from the prior year.

Dell, another winner, managed to eke out market share growth for the first time since 2011, according to IDC's report. Thanks to strong stateside sales, IDC said, Dell grew shipments 0.3 percent.

Desktop PC shipments were surprisingly robust, making up 39 percent of all PC sales. But Singh said the big winner was Google's low-priced Chromebooks. "Retail acceptance of new and emerging product categories, such as Chromebooks and ultraslims, helped the portables segment," she said. Singh said Chromebook sales in the education market are booming.

In the US market, HP, Dell, Apple and Lenovo were among the top four PC makers. HP and Dell both saw near flat growth, Apple contracted, and Lenovo saw shipments grow a whopping 26 percent. When it comes to form factors, Singh said portables -- such as Chromebooks, ultraslims and standard laptops -- made up the lion's share of PCs sold, followed by desktops, all-in-ones and convertible notebooks.

This article originally appeared at crn.com

Got a news tip for our journalists? Share it with us anonymously here.
Copyright © 2018 The Channel Company, LLC. All rights reserved.
Tags:
acerasuschromebooksidcpczgoogle